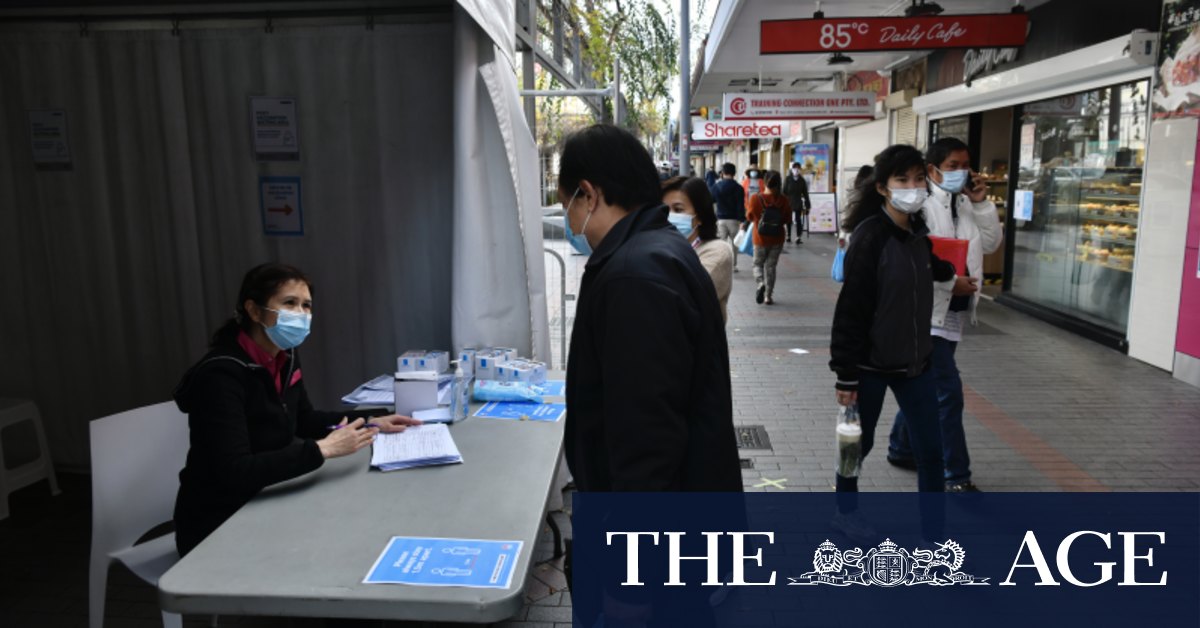 “We will not have enough Pfizer in the next few weeks to be able to do what we really could do in those hubs,” he said.

The push comes after NSW Chief Health Officer Kerry Chant said the ministry was looking at how it could prioritise vaccinating younger people in western Sydney. On Monday it was announced some supermarket workers would become eligible for Pfizer shots and walk-up AstraZeneca clinics would operate in Cumberland Council.

Despite uptake of the AstraZeneca vaccine increasing as case numbers have surged, only 2 per cent of people aged under 40 in NSW have had a first dose.

There were 172 new local COVID-19 cases in NSW on Tuesday, the highest daily total recorded during this outbreak.

Nine patients recently treated at Liverpool Hospital tested positive to COVID-19 after infections were detected in two nurses and a student nurse. One nurse was fully vaccinated and two were partially vaccinated. The cases have plunged more than 300 nurses and healthcare staff at the hospital into isolation, according to the NSW Nurses and Midwives’ Association.

Cabramatta pharmacist Quinn On said he vaccinated 55 people on Monday, and at least 40 in the first two hours of business on Tuesday.

He was inundated with requests from people under 40 wanting AstraZeneca after the state government’s announcement.

“It’s quite unexpected this level of demand. We are going to run out of vaccines really soon.”

He believed having vaccines administered by people who speak community languages would make a huge difference.

Pharmacy Guild NSW branch president David Heffernan said pharmacists will be heavily relied on to provide inoculations in south-west suburbs but easier access to personal protective equipment was needed so pharmacies can stay open when exposed to positive cases.

“There is a stockpile of PPE in NSW but pharmacists are often paying for this equipment out of their own pocket. There are also no guidelines on if the pharmacy can stay open if exposed to a positive case,” he said.

Dr Hua said there was more interest in Pfizer, although he was holding off booking in patients for those shots – scheduled to begin next week – until they had vials in the fridge. People calling about Pfizer were usually happy to book AstraZeneca instead, he said.

“And when we do have Pfizer we need to follow the national rollout and keep it for people aged 40 to 60, Aboriginal people, pregnant women,” he added.

Royal Australian College of GPs NSW/ACT chair Dr Charlotte Hespe said Pfizer could be given only to those prioritised in the national rollout, meaning otherwise ineligible younger Sydneysiders needed to seek AstraZeneca, ideally in consultation with a GP.

“And sure, there’s a very small risk associated with AstraZeneca, which means we will move over into Pfizer [later this year], but there are also massive benefits of AstraZeneca and that is what we need to understand if we are going to get through this period,” Dr Hespe said.

“In a crisis we need all hands on deck,” she said.

At least 79 of Tuesday’s cases were in the community for some or all of their infectious period.

NSW Nurses and Midwives’ Association general secretary Brett Holmes said the temporary loss of up to 300 staff at Liverpool Hospital would have a major impact on an over-stretched health service.

“We are raising our concerns directly with the Local Health District and the Ministry of Health, given it’s unclear how they’re managing this effectively without a reduction in services at Liverpool Hospital.”

There are now four out of six hospitals in Sydney’s worst-affected areas that have had positive cases expose patients and staff to the virus.

A Blacktown apartment building was locked down after six cases were recorded across three households in the complex.

NSW Health advised people who had been to the Campsie Centre shopping mall between July 14 and last Saturday to immediately get tested after the ministry concluded the virus had been transmitted within the building.

Other close contact venues included Fairfield District Medical Centre on July 16 and 19, Campsie Family Medical Centre on Thursday morning, the Exodus Foundation at Ashfield around lunch from Tuesday through Friday last week and the Parkview Granville Place development on the morning of July 17.

There are 169 COVID-19 cases in hospital in NSW. Forty-six are in intensive care and 19 require ventilation.

Victoria will exit lockdown measures on Wednesday, although a ban on home visits and a mask mandate will remain in place.

Stay-at-home orders for Orange City Council, Blayney Shire Council, and Cabonne Shire Council in the state’s west will lift at 12.01am on Wednesday.