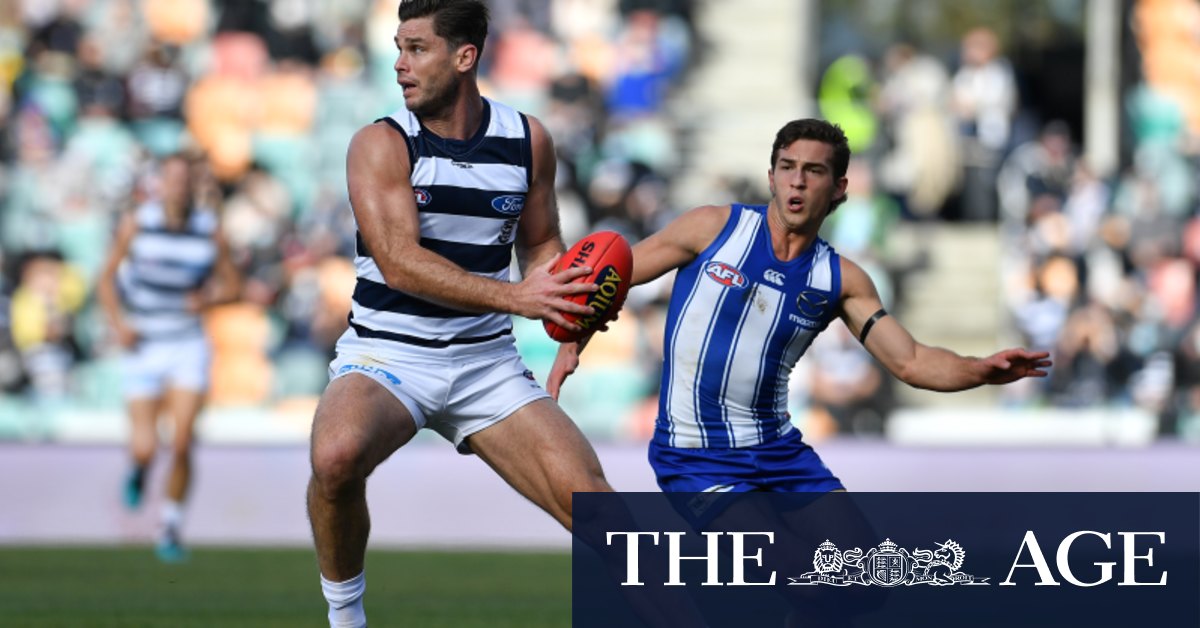 When Hawkins, who had been well held by Ben McKay on the small Tassie field, kicked truly with five minutes left on the clock, the Cats held an unassailable 19-point advantage.

But Roos coach David Noble was pleased with his side’s efforts against the premiership fancy.

“I was strongly encouraged over our performance,” he said.

“I think today we showed a bit more depth in our list – nine guys under 22 – and in the end I was really pleased with the effort. There were some reasons we weren’t able to get through at different times…we turned it over too many times, but overall I was quite pleased with how we approached the game.”

Patrick Dangerfield (21 disposals, four clearances), who had just one touch in the third term, lifted in the final stanza, while the Guthrie brothers Zach and Cam were among their side’s most prolific, with 28 disposals each.

Defender Zach Guthrie, who was a late inclusion in the side for Tom Atkins (back soreness), took 13 marks and looked comfortable back in the senior side, while fellow defenders Tom Stewart (24 disposals, 13 marks) and Zach Tuohy (26 disposals, eight marks) were as sturdy as ever.

But it was the Roos who really felt their outs. With Ben Cunnington (tumour), Tarryn Thomas (concussion) and Cam Zurhaar (shoulder) all out of the team, the task was left to too few. Aaron Hall (35 disposals) and Jy Simpkin (29) had the most disposals, but the Roos lacked firepower in front of the ball.

Noble said he expected Zurhaar would be right to play the Tigers next Sunday.

The win was Geelong’s fifth on the trot, and their 11th from 12 matches, guaranteeing their spot in the top two for another week.

How Goodwin’s tough talk made May elite