Breaking News
Home / Latest News / Why do magpies swoop, and how can you avoid it?

Why do magpies swoop, and how can you avoid it?

admin August 11, 2021 Latest News Comments Off on Why do magpies swoop, and how can you avoid it? 49 Views 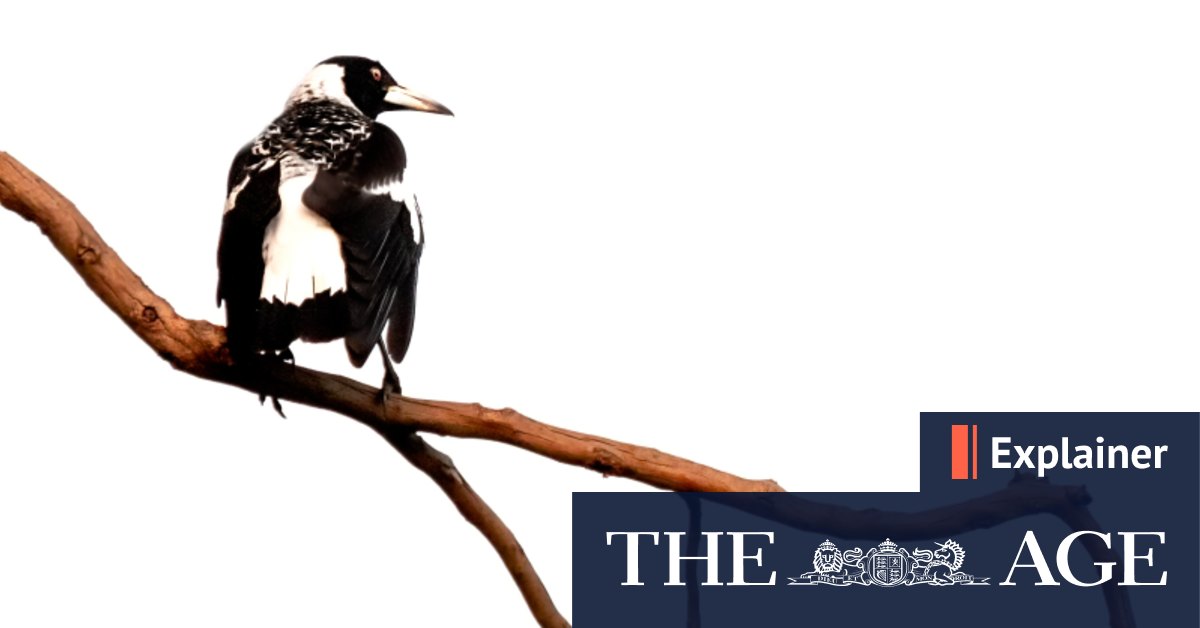 Although extremely rare, deaths linked to magpie attacks do happen. Aside from baby Mia, a man died in Wollongong in 2019 after crashing his bike while being attacked by a magpie.

The birds themselves can also cause injuries. In 2020, a man and woman suffered eye injuries in separate incidents in regional Victoria involving a particularly aggressive magpie. Far more common are scratches to the head, neck or face from the birds’ sharp beaks.

Despite that, magpies have an unearned reputation as an aggressive species, Castley says.

“The majority of birds are not aggressive, even the ones that are defending their territory will show restraint, but a few are aggressive, and they cause the trouble,” he says.

Local councils usually compile records of magpie attacks, while the independent website Magpie Alert compiles national data based on readers’ submissions. It has recorded 212 magpie attacks across Australia so far this year, with Queensland clocking up the most of any state with 88 reported attacks.

Magpies are not the only bird that swoops in Australia: peewees, butcher birds and plovers do too, although Dooley says given magpies are more common, the number of incidents is higher.

What should you do if a magpie swoops you?

The best advice appears to be to stay calm, despite that being difficult when an angry bird is flapping in your face.

“Usually they actually don’t try to make contact with you, they’re aiming to scare you off, so they’ll come at you from behind,” Dooley says.

“Waving your arms around or a stick or something is only going to make the bird more angry, so the best thing to do is walk, not run, away from the area.”

Castley says instead of waving your arms above your head, simply placing them over your head to protect it is the best bet.

“So, walk as fast as you can but don’t run, protect your face, and get out of there as quickly as possible to minimise your risk of injury,” he says.

But how can you avoid getting swooped?

If you know there’s a nest, obviously steer clear. If you can’t avoid areas where there are nests, be aware that cyclists tend to be much more likely to be attacked than people on foot, and runners tend to be attacked more than walkers. Dooley says that’s because the birds view something moving rapidly into the vicinity of their nest as a much greater threat than something moving slowly.

“The birds don’t have time to assess whether someone is a threat if they’re moving too quickly, so they just decide it is and start swooping,” he says.

Castley says ploys such as sticking googly eyes on the back of your helmet are of mixed benefit, and agrees with Dooley that carrying a stick to lash out at the birds will just anger them more. “A better bet is something like an umbrella, which can shield you without antagonising the bird,” he says.

Outside the immediate situation, Dooley says playing a long game could help ensure you avoid magpie attacks – at least in your local area. Because the birds can recognise individuals, going out of your way to make friends with them can ensure they recognise that you’re not a threat, he says.

“Obviously it’s a bit impractical to carry some mince in your pocket while you’re out walking or cycling, but if you feed them at your home at other times of the year, they will remember come breeding season,” he says.

“And just in general, if you don’t antagonise the birds, they will mostly leave you alone.”

He says because magpies are so widespread throughout the same areas that humans inhabit, it’s in the interests of both to get along. “They’re not bastards, they’re actually really caring parents. We just share the same habitat, and we have to try to find a way to co-exist.”

Previous Queensland auction house criticised for ‘sickening’ sale of Nazi items
Next Why are governments supporting such bigotry?