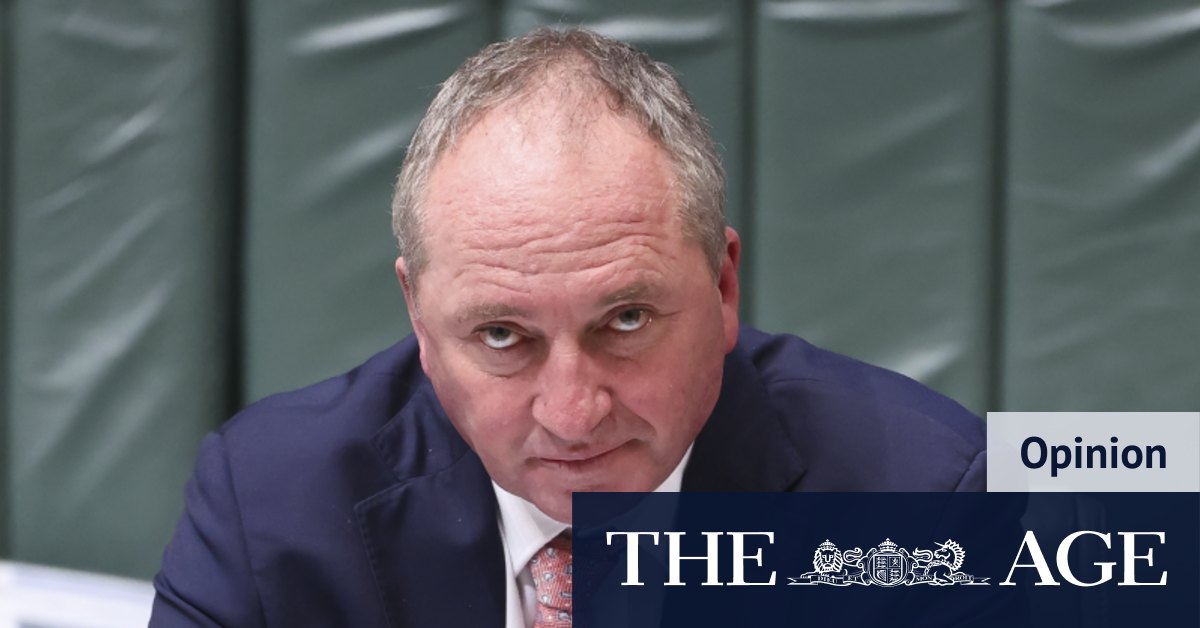 With this week’s “Code Red” climate report from the Intergovernmental Panel on Climate Change adding to the pressure on Australia to cut emissions, Joyce responded in trademark style. Metaphor, juxtaposition, rhetoric, bluster, elision.

His objection to committing Australia to cut emissions to net zero by 2050? “I am going to buy the house at the end of the street. OK, how? Just believe me, I’m just going to buy it. Show me how – otherwise it’s just a nice thing to say.”

His point? He won’t commit to difficult outcomes without a specific plan. So what’s the plan?

“OK, we’re going to close the Sydney Harbour Bridge, the M2 and the M5 – so Sydney should be meeting its obligations” to cut emissions, he told me. “That’d be about the last election you’d have to worry about contesting for the next 20 years.”

His point? He won’t commit to a politically unpopular plan. But hold on. As many have pointed out this week, Joyce is the leader of the National Party and Deputy Prime Minister. He’s a member of the federal cabinet and its key subcommittees. He’s the guy who should be developing the plan, not the guy complaining about the absence of one. You can’t play the outsider when you’re the ultimate insider.

“All right, Barnaby Joyce plants 400 trees and she’s all done. I Barnaby Joyce now decree that we will be at net zero emissions by 2050. Because apparently I’m an expert.”

No, Barnaby, we don’t expect you to do it solo. You have all the resources of the biggest organisation in Australia, the federal government. Aren’t its expert agencies capable of developing a plan?

“I can’t say the work isn’t being done. I’m aware of work we are doing to meet our current targets, so obviously there are people there who are capable of doing that work. It might be remiss of me, but I’m not aware of it.”

Barnaby comes up with everything, in other words, except progress. UN Secretary General Antonio Guterres declared “code red for humanity”. The Australian government appeared to respond with Code Barnaby.

But, beneath the bluster, he has changed. He’s changed his position on climate change action. Quite markedly. And that opens the possibility for Australia to change.

Joyce invented the $100 lamb leg, remember? It was to be the inevitable result of any attempt to price carbon. “How will signing a piece of paper in Canberra change the global temperature?” was another of his creations, trumping all arguments in favour of any agreements or actions on climate change. And then there was the ice age:

“When the ice age does arrive temperatures will drop around 10 degrees. A warmer planet will be a disconsolate chronicle and many, maybe most, will die from starvation as is the usual experience of man or beast in previous ice ages,” he wrote a couple of years ago. “The weather is going to brutally win the population problem and the Parliament of Australia has no power against it. One may suggest that warmer weather is the better problem of the two.”

This was obscurantist Barnaby at his best worst. Even just last month Joyce told The Financial Review’s Phillip Coorey that there was “zero” chance he would agree to any policy of net zero emissions by 2050. He would lose his post as Nationals leader if he tried, he said.

But this was the point where Joyce changed. Or was forced to change. Coorey’s piece was posted to the internal National Party parliamentary WhatsApp group. There was a reaction:

“There were some people in the party room who said to Barnaby, ‘Mate, that’s not your right, that’s a decision for the party room’,” says a fellow Nationals MP. “It was a stern lesson for him. He understands that he’s leader of the party now and he has to represent the party.”

Till then, say his colleagues, Joyce had been representing the views of himself, his understudy Matt Canavan and the all-purpose rogue George Christensen in a party room of 21.

Not that the rest of the party are now climate activists clamouring to join Extinction Rebellion. But the deputy leader, David Littleproud, who’s also Agriculture Minister, tells me that the party collectively will consider whatever plan Morrison puts to it: “We will see this and have a look at the detail. I would never blindly say ‘no’ – we need to sit down as a party room and decide one way or the other. That’s the responsible thing to do on such a significant issue.”

“What worries us,” says Littleproud, “is that the bill keeps getting sent west,” from Canberra and the eastern seaboard cities to the rural hinterland. “We want to be honest with people about how we get there and who pays, and the fact that we’ve paid the bill out here” – Littleproud represents the vast electorate of Maranoa in south-west Queensland – “that’s the opportunity to square the ledger and get paid.”

That’s a reference to resentment over the Kyoto accord that Howard signed in 1998. Under the terms of the deal that Howard struck with NSW and Queensland, farmers lost some measure of control over their land-clearing rights. The carbon credits that this generated were used to offset emissions growth in other industries.

Barnaby is no longer flatly ruling out any progress. It’s not arguments against any action. “If we are going to take further steps, then we have to tell people what those steps are,” he says.

It’s now about the price of the Nationals’ support. “No one ever talks about compensating the people in the towns,” he tells me. “You’ve gotta remember the vast majority of Nationals voters aren’t farmers, they are people living in the regions and towns.” In his own seat of New England, for instance, only 12 per cent of the electorate are farmers.

“You’ve gotta have an empirical basis for figuring out the plan, and confidence in the acumen of the people developing the plan so you can take it back to the electorate and tell people honestly where the pain is.”

He points out the fact that the interests of farmers don’t necessarily converge with those of town and village dwellers. Some farmers are selling their land so it can be used as a carbon sink to generate carbon credits, for instance. “OK, who’s the beneficiary? The farmer who sells the land. Who’s hurt by that? People in the town who lose the economic base” of a farm no longer delivering farm produce.

By demanding a detailed plan, Joyce is actually putting the onus on Morrison to produce one. The game has changed. Barnaby the obscurantist denialist is now Barnaby the negotiator. This casts him as a more traditional Nationals leader, the junior Coalition partner seeking benefits from the senior. The negotiations haven’t yet started, but they will need to soon. The Glasgow climate summit, where countries are expected to pledge revised emissions reduction plans, is in November.