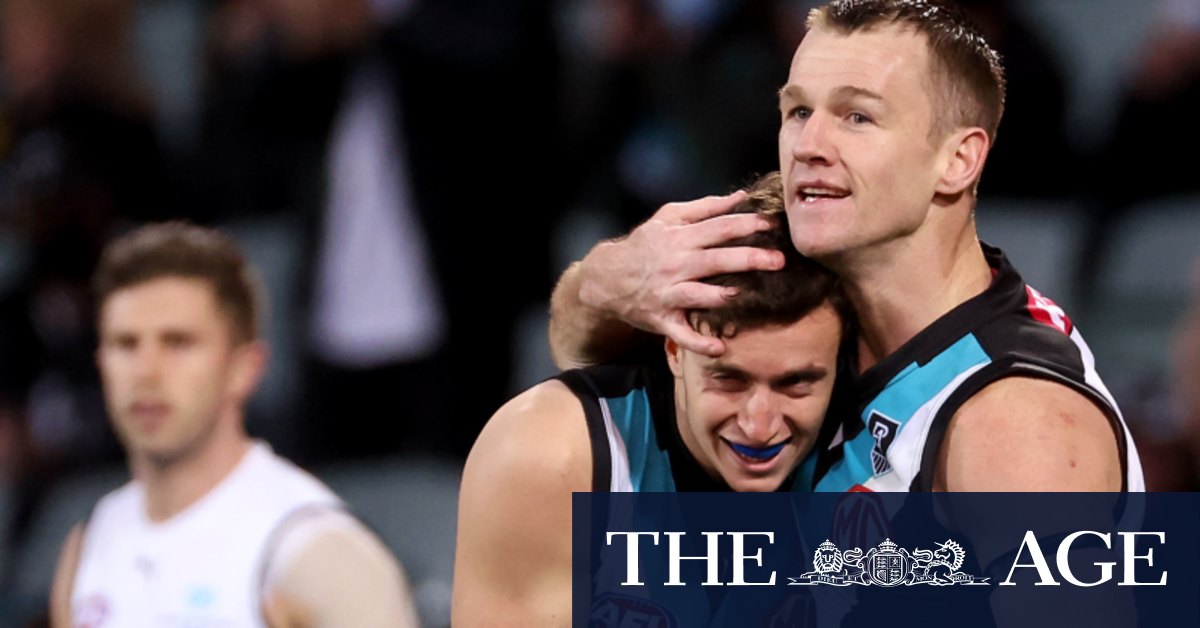 Zak Butters played the playmaker to perfection, Travis Boak, Ollie Wines and Karl Amon strolled through the middle of the ground and Port’s forwards filled their boots.

Charlie Dixon (four) lowered his colours to Sam Weitering for much of the match but this tide was too strong for the sturdy Blues backman.

Orazio Fantasia, Miles Bergman, Todd Marshall, Mitch Georgiades and Robbie Gray all got on the end of the Power’s flood of forward forays.

Meanwhile Carlton put the cue in the rack early and, on the few opportunities they did muster, were let down by horrid finishing, Mitch McGovern the prime culprit.

It was launched when Todd Marshall, the unused injury sub in last weekend’s nail-biting Showdown triumph, dribbled through a left-foot snap.

Mitch Georgiades cut off a Carlton kick-out before sprinting forward, outmarking Blues debutant Brodie Kemp and slotting truly from an acute angle in the scoreboard pocket.

Ruckman Scott Lycett spent part of the second quarter having his left knee attended to before coming back on, sneaking forward and booted another major.

Then 40 seconds out from half-time, Charlie Dixon, who was being given a bath by

Weitering, converted a free kick with his first touch to make it a run of six unanswered, dominated by Port’s 192cm-plus brigade.

The former skipper had eight first-term disposals (and finished with 24) and was ably aiding the prolific Walsh in conjuring what looked, momentarily, an upset for the ages.

As much as he tried his heart out, Murphy, one of the Blues’ greatest modern-day champions, could do little to avoid his 300th game being a farewell to forget in the final, brutal wash-up.