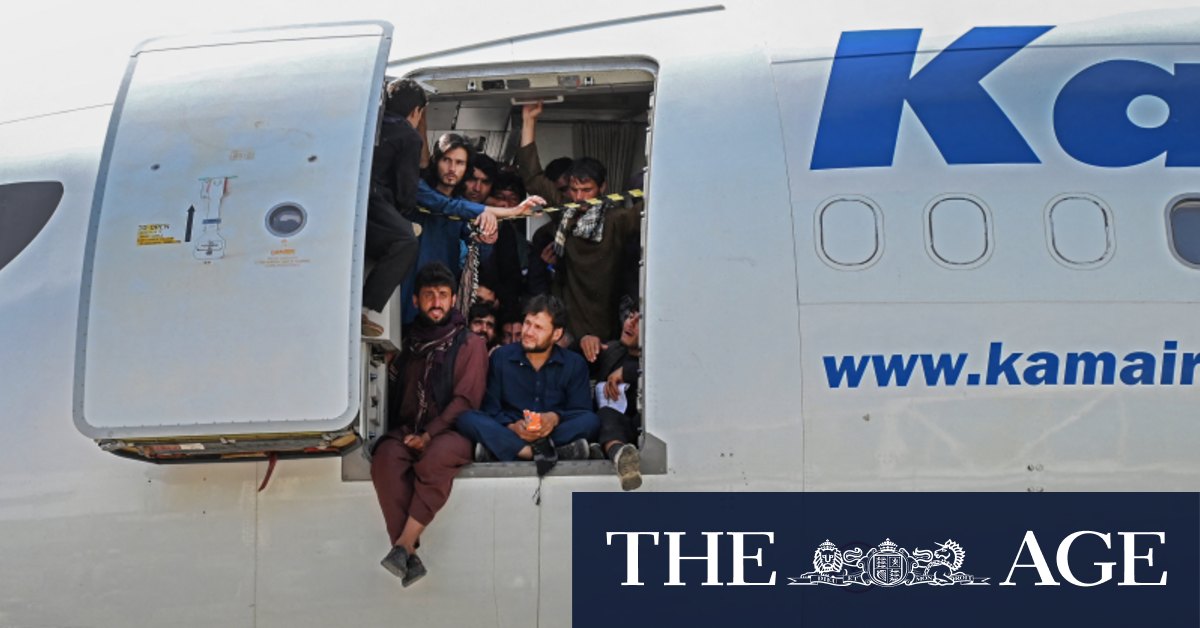 Johnson plans to convene a virtual meeting of the G7 and work with Macron on a joint resolution to be put to the United Nations Security Council about the Afghan government’s surrender.

Speaking in Washington on Monday afternoon local time, Biden said the scenes of panic at the airport were “gut-wrenching” but did not resile from his decision, amid accusations of American abandonment.

“I stand squarely behind my decision,” he said. “After 20 years, I’ve learned the hard way that there was never a good time to withdraw US forces.”

Biden continued: “I’m deeply saddened by the facts we now face. But I do not regret my decision to end America’s war fighting in Afghanistan.”

He said the rapid collapse of the Afghan government justified the US decision to leave the country.

“American troops cannot and should not be fighting in a war and dying in a war that Afghan forces are not willing to fight for themselves,” he said.

While defending his decision to end America’s military involvement in Afghanistan, Biden conceded that the US-backed Afghan government had collapsed sooner than his administration had anticipated.

US Secretary of State Anthony Blinken has been hitting the phones, calling his counterparts around the world including Russia’s Sergei Lavrov and Britain’s Dominic Raab to try and repair the damage.

When asked if his government would deal with the Taliban, Raab said Britain would have to face the reality that the Taliban were in power.

The Taliban are attempting to present a more moderate face since seizing control. On Tuesday, they said they would grant an amnesty to former public servants and urged women, previously forbidden to work or go to school, to join its government.

“The Islamic Emirate doesn’t want women to be victims,” Enamullah Samangani, a member of the Taliban’s cultural commission, said.

But fear and panic gripped many locals, including thousands who had assisted the allied military mission. Afghans raced to Hamid Karzai International Airport and swarmed the tarmac trying to board a flight out.

Some managed to haul themselves onto a US military transport plane via a half-open ramp. The jet, designed to carry 134 people, carried a near-record 640 to safety, US media outlet Defense One reported.

But at least seven were killed at the airport, either by gunfire, in the crush, or when they fell from a plane after attempting to stow away.

The US military struggled to maintain order, firing warning shots into the air before shutting down the airport.

Amid the growing international political anger, the situation in Kabul appeared calmer on Tuesday morning as military evacuations resumed.

“I see airplanes landing and taking off,” said NATO’s civilian representative to Afghanistan, Stefano Pontecorvo, who was at the airport.

Female reporters returned to air on Afghanistan’s TOLO News. The television station’s head of news, Miraqa Popal, said it had broadcast an interview with a member of the Taliban conducted by a female presenter.

With Reuters, AP and Bloomberg.