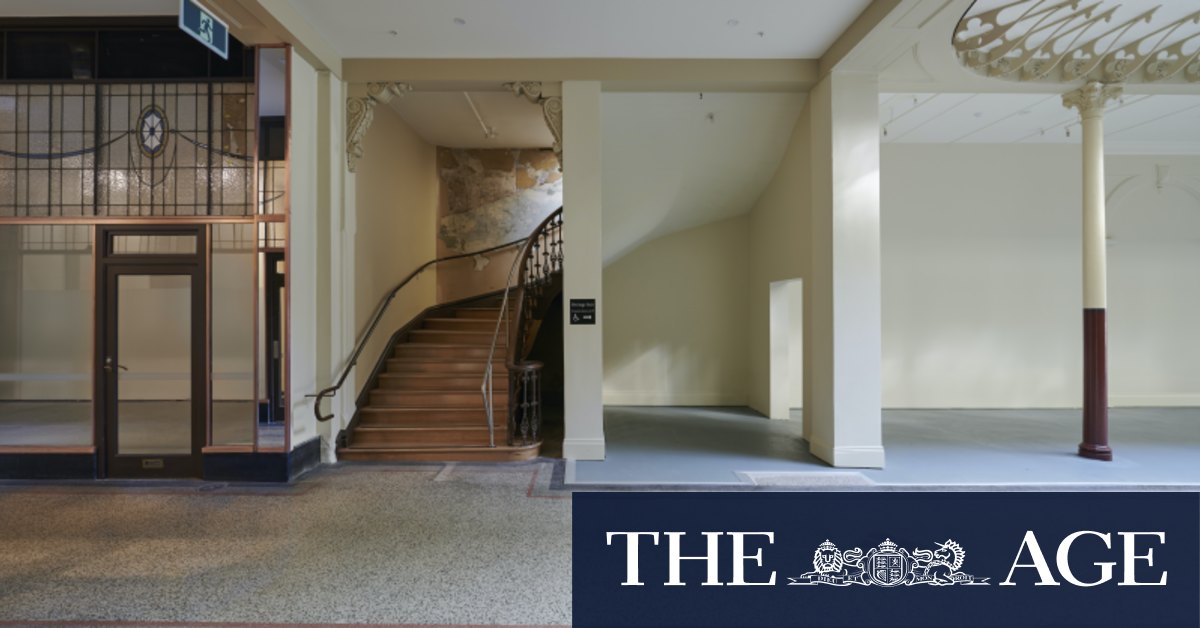 While the original Bee Hive included brokers’ offices (trading in gold), the arcade below was given over to a number of speciality stores, including Allans Music. Hence the Allans logo is a feature of the terrazzo floors in the arcade.

However, apart from a few vestiges from the past, most of the fabric from both periods was concealed.

A false ceiling in the arcade completely covered the fine leadlight windows to each store.

The fine steel columns framing the entrance into the Bendigo Mining Exchange was also not apparent, and neither was the intricate wrought-iron staircase connecting the two levels.

“When you are working on these types of projects, they require substantial research, piecing together each piece of ‘evidence’,” says Williams, who was pleased to restore the stores to their former glory: marble skirting and fine copper edging along the many leadlight windows.

Other clues came from discovering a few remnants of the highly decorative wrought iron that originally formed a balustrade on the first floor.

“We were extremely fortunate that the council had a couple of panels which meant we could faithfully reproduce Webb’s original design.”

Where it wasn’t possible to reinstate original features, such as skylights on the floor of the first landing, these have been thoughtfully articulated by changing the direction of the timber in the floors by 90 degrees.

“It’s about memory and making it clear what existed,” says Williams, pointing out some of the blemishes in the walls.

Other insertions, such as curved indentations in a ceiling, also indicate where a porthole window/skylight once existed.

While the offices once used for the gold traders are relatively modest in scale, as small as 4 by 2.5 metres, there are two grand rooms on the first floor bookending these spaces.

Referred to as the ‘salons’, these rooms have also been carefully restored and lightly touched to ensure the history of the built form can be easily ‘read’.

Some of the architectural detail such as the iron columns framing the entrance to the former Bendigo Mining Exchange, have been unveiled and beautifully restored.

Other features, such as the sinuous steel brackets directly above the entrance, are almost entirely new, but with one of the original brackets inserted and clearly from the period.

WBA left some walls in their original condition, while others such as the facades to the offices, have been painted in a soft teal blue grey.

In other places, there are scraps of original wallpaper.

Although this landmark will not see Allans Music returning, it will eventually be used for a combination of hospitality and retail, hopefully attracting speciality retailers that will benefit from such a lovingly restored project.

For many, it will be the first time they have entered the first floor, which had been boarded up for decades.

“It now has another life, but will continually remind people of both great periods in the building’s history,” adds Williams.