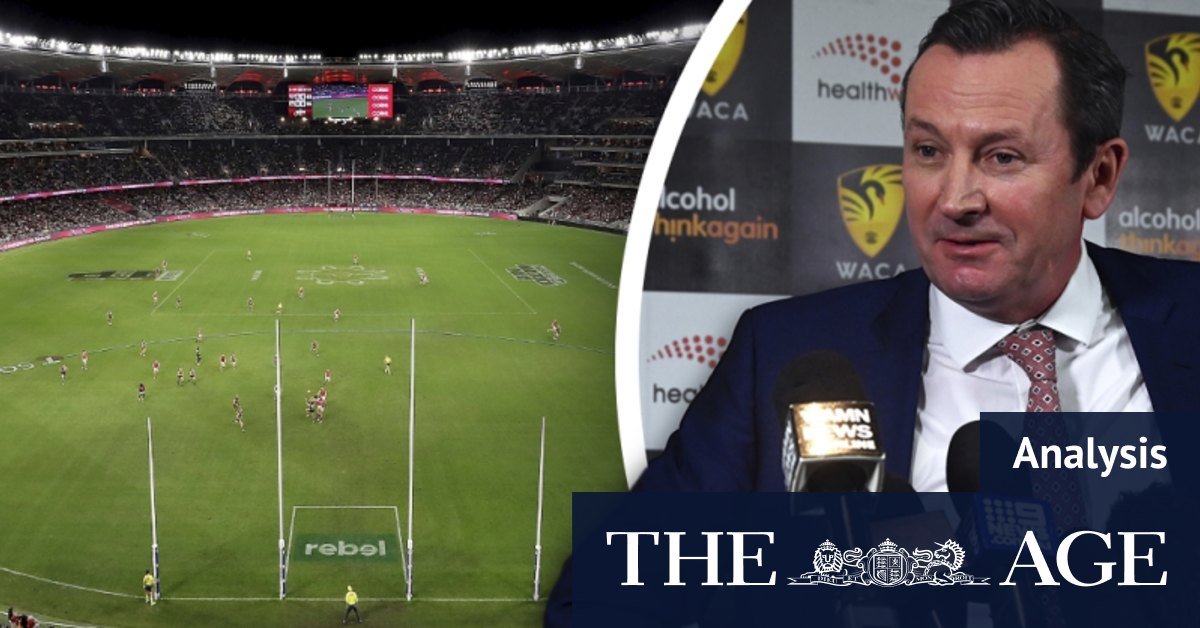 Brisbane hosted the first AFL grand final outside Victoria in 2020 at the Gabba, which can seat close to 37,000 spectators at full capacity, while South Australia’s Adelaide Oval can hold 53,500.

While WA’s $1.8 billion, 60,000-seat stadium would boost AFL coffers the most, McGowan has been reluctant in the past to commit funds to secure the marquee fixture, with the two rival states likely to swoop and sweeten the deal for the league with a monetary commitment as part of their bids.

“They don’t want the images they had last year of people frolicking in resorts and going to nightclubs in Queensland, and neither do we.”

The league’s decision to scrap the pre-finals bye has opened doors for Perth to host a grand final parade with players from both clubs and the public as well as other key grand final week events.

AFL boss Gillon McLachlan said on Friday the decision to push ahead straight to finals was to keep momentum up and he hoped to announce the venue for the grand final in a week.

“There is not a lot of upside to stopping but we have also kept the grand final day on the same date. If we push through the first three weeks of the finals and we get there, and if it was at the MCG, Perth or Adelaide, or the Gabba, what we would do then is have a bye, build momentum,” he told 3AW.

“If it was in a non-Victorian jurisdiction, we would be able to work hard to make sure everyone is out of quarantine and have the best build-up we could. There is an advantage in that, absolutely.”

Logistically, the final four clubs left in the premiership race could arrive in Perth on September 5 after the semi-finals to begin quarantine. Two preliminary finals could then be held on September 10 and 11, so the qualifying final winners avoid a two-week break to preserve competitive integrity.

The pre-finals bye would occur the following weekend, with the grand final clubs ending their quarantine on September 20, allowing the AFL to hold its traditional parade and even the Brownlow Medal in Perth before a ‘clean’ grand final at Optus Stadium on September 25.

“That has a lot of logic to it,” McGowan said when presented with the scenario on Thursday.

“We want the AFL to be able to complete their season and we stand ready to assist, as long as they abide by the strict rules we have in place.”

The plan would appease the AFL, given it could then monetise other grand final events and essentially get out of jail for free.

McGowan said a week of celebrations in WA was possible but insisted his state would not pay the AFL to bring the grand final to Perth.

“We put a plan to the AFL that they’ll consider, and it’s very COVID-safe. So, in terms of people coming out of NSW, we’re saying no,” he said.

“In terms of big financial grants [to the AFL], we’re saying no.

“They don’t want to be responsible for a COVID outbreak, they don’t want the images they had last year of people frolicking around in resorts and, you know, going to nightclubs and all that sort of stuff in Queensland, and we don’t want that either.”

“We think just from West Australians alone …. we will get about 30,000-plus visitor nights in hotels,” he told 6PR. “That would inject about $10 million into our hotels.”

On the subject of hotels, rooms at Perth’s Crown Towers – next to the Optus Stadium precinct – were already exhausted for the night of September 25, the only Saturday night in the next month it was fully booked.

Time will tell if those bookings are prescient or premature.