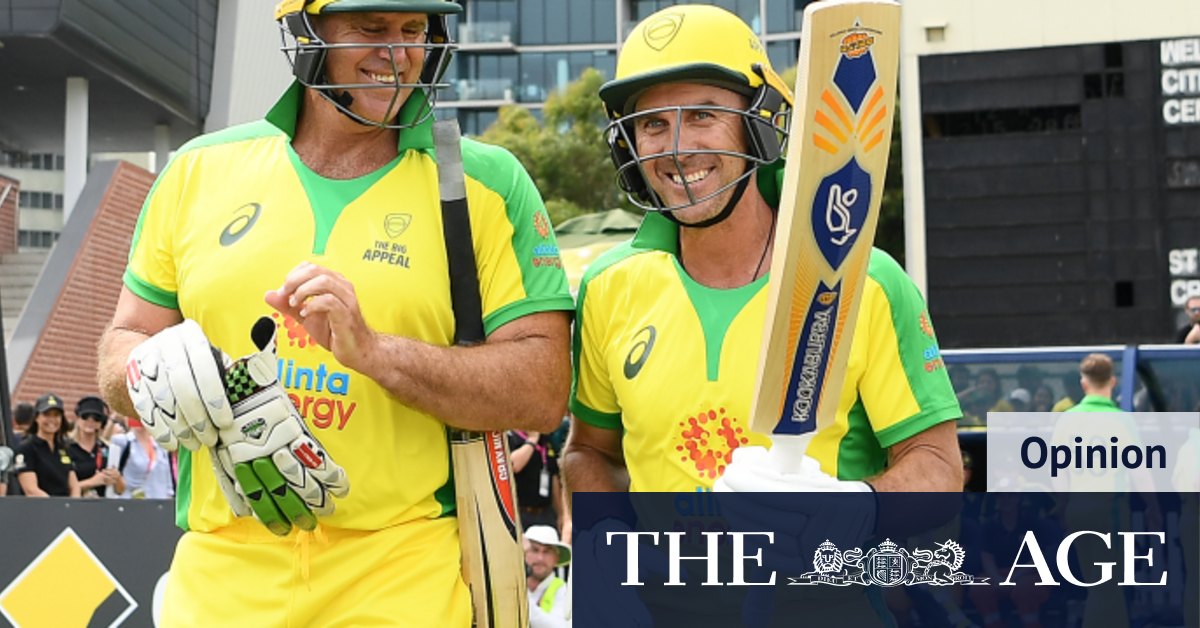 “Even this facetious discussion amongst senior players last night . . . about deciding Justin Langer’s future. Umm, hello! What about meeting about the fact you’re No.3 in Test cricket and No.3 in ODI rankings, and No.6 in T20 rankings? Waste more energy and time thinking about that than discussing a bloke who’s a legend of the game and so passionate about Australian cricket and culture. It reeks of the lyric, ‘sixth months in a leaky boat’. So many holes are now coming out.”

As above. Commendable loyalty, but beside the point.

Hayden then set his sights on the Herald’s chief cricket writer Malcolm Conn, who used to work for Cricket Australia.

“It’s really frustrating me this,” Hayden went on, “one of the guys in particular that I’m very disappointed with is Malcolm Conn. From the inner sanctum of the dressing room, he shot holes in Langer’s character in his article two days ago. That was when he was employed by Cricket Australia, and from the inner sanctum. This is a bloke that sang the team song.”

Matthew? Conn is a journalist, not a fan with a typewriter. The years pass, roles within the game change.

When teams get to this point, are losing, it’s over. Langer has done his very best for the Australian team, and by and large has done a really good job, most particularly when it came to restoring integrity in the side after the dreadful affair in Cape Town. But all put together, every sign I see – the positive comments of Tim Paine on Friday notwithstanding, on the grounds that one honest leak equals 50 sets of prepared remarks – says that most of the team are begging for a change of coach.

Gift of the jab

Bravo the NRL for launching their campaign on Friday to get vaxxed. As this column has been insisting for some time, we need all the football codes to put their weight behind this, both as a public service and by way of helping ensure their own physical and economic survival. Right now, both the AFL and NRL competitions continue to hang by a thread as does the Rugby Championship. If just one COVID-positive player takes the field, it will see a super-spreader event that would put the White House Rose Garden to shame. So when we have popular NRL players saying they support vaccinations, it is to the good. My only quibble is that most of the players are saying that they will get vaccinated, not they have been vaccinated.

I get that, as professionals, many of them will be reluctant to risk hindering their performance with those after-effects that sometimes come in the first day or two after being vaxxed. But it would be good to see those that are out injured or even suspended for a week, get the jab, and put it on social media.

Quick! You have about four days before you can start to binge-watch the Paralympics the way we did the Olympics a fortnight ago. In the interim, as you are looking for something to completely absorb you in lockdown I have just the thing, and it has a strong sporting angle. It’s an absolutely compelling Australian production, a 26-part drama series over three seasons, screening on Binge – whatever that is – called Mr Inbetween, starring Scott Ryan, who also created it and wrote the script.

But here’s the thing about this low-life Sydney crime story with black humour throughout. Two of the stars of the production are former rugby league players Matt Nable and Ian Roberts, and they both give wonderful performances as rough and murderous thugs who nevertheless have a strong streak of humanity in them. I’ve always said Roberts was the toughest footballer I ever saw, particularly in his days at Souths and Manly, and it was while at the latter club that he got to know Nable who was in and out of the first-grade side.

The rapport between them on-screen is so strong I wondered if it might have been sourced to those long-ago days at Brookie?

“Matt’s dad Dave was our trainer at Manly,” Roberts tells me, “a real decent, kind man. Matt and I first became friends through that, and then football. Matt is much more accomplished with his acting than me, plus he’s self-made, and he is such a natural at it. As for me, if I had to survive on my acting skills I’d go pretty hungry. As a kid, I was a closeted actor. I was always in the school ensemble growing up. It wasn’t ever encouraged at home. I loved performing as a kid, be it on stage in front of an audience or on the oval in front of the crowd. Let’s be honest, sport is just another form of theatre. There are so many comparisons. They’re both creative and instinctive. In sport, you train for the big day, while actors rehearse for the big performance, under the direction of the coach or director.”

Yup. But who knew you were so good at it, Ian?

“Thank you. I fell back into acting by default once football was done. I love it. It keeps me young. At 55, I’m still waiting for someone to take the big chance on me. It feels like people don’t see me as an actor who’s auditioning because I don’t come from that background they see me as an old ex- footballer who’s trying his hand at acting. But I’m good with that, I know I can act.”

And he bloody well can! As for Nable, he has such a seriously well established career as an actor that football is his footnote, but he, too, was impressed with Roberts.

“Ian was as committed as any footballer I’ve ever seen. And I could say the same about his commitment to his craft of acting. Robbo is exceptionally good. And that’s the universal knock on him from everyone who’s worked with him. Courage personified on the field and off. And because of that, Robbo as an actor has a well to draw from most will never have.”

A load of bull

As a quick point of order, my friend Andrew Johns, I note your remarks on Storm fullback Ryan Papenhuyzen’s seeming loss of form after coming back from a serious concussion: “The way to get over it,” you wrote in these pages, “is grab the bull by the horns and get smashed … The lack of contact work [during his time on the sidelines] is where the demons are coming from.”

From a football point of view, you are probably right, Andrew. But from a medical point of view – which is the only one that counts when the stakes are this high –you are dead wrong. Concussion is brain damage, and needs time and care. “Get back out there and get smashed,” was indeed the rallying cry from the dinosaur days, but those days are mercifully gone.

@Former_Legend with some tragi-comedy on Twitter, last Sunday: “415 cases today. Surely we get to 500 and declare just before lunch and put Victoria back in? ”

MMM Breakfast bloke, the Moonman, who is a friend of Shane Warne, uses “darts” as the slang for cigarettes in this revealing quote about the one-time spin-meister: “His life is Tinder, beers, darts, gambling and cricket. Those five things, that’s it.” Shades of the famous W.C. Fields quote? “And the rest of his time, he wastes.”

The retiring Eddie Betts on Adam Goodes: “He gave me that voice and that strength to stand up and talk about and believe in myself and have the strength and courage to stamp out racism here in Australia, to call it out when I see it and educate people.”

Betts on enduring racism in the AFL: “I don’t feel like it’s safe at the moment. I feel like there’s still a lot of racism. This year there has been a lot of racism. It’s been draining and it’s been tiring. Every year we’ve seen myself and the other Aboriginal boys standing up, trying to call it out, trying to make a stance.”

Tasmanian Premier Peter Gutwein on his state wanting its own AFL team: “We want to run and operate our own team, we don’t want to rent one.”

Peter Sterling will hang up the mic at the end of this season: “I’ve had a professional life that I could never have dreamt of. I knew when I started that it is the kind of industry that any day you could get a tap on the shoulder. I’m extremely satisfied that in the end I tapped myself.” I know. It will be the first time since the war that a media professional walks out while at the top of their game. But it is typical Sterling – all class.

Afghan Taekwondo Paralympic athlete Khudadadi, who was born with a disability, last week talking about her hopes for the Games: “I was thrilled after I received the news that I have got a wild card to compete at the Games. This is the first time that a female athlete will be representing Afghanistan at the Games and I’m so happy.”

The Afghanistan Paralympic Committee’s chef de mission Arian Sadiqi, on the country’s two Paralympians, Khudadadi and track athlete Hossain Rasouli, cancelling their trip to Japan: “Unfortunately the Taliban took over Kabul and everything went haywire. To be honest with you, it is very hard. My heart is just shaking, I couldn’t sleep last night. The whole situation became very chaotic very rapidly, so we had no choice but to opt out from the Games.”

PETA president Ingrid Newkirk on using horses in the Olympics: “The Olympic Games showcase human athletes, not the ability to terrify and injure horses who don’t choose to compete yet are doing all the work, sometimes at the cost of their very lives. Just as the Games have evolved to include modern sports like skateboarding, PETA is calling on the International Olympic Committee to relegate abusive equestrian events to the history books.”

Paul Daugherty of the Cincinnati Enquirer to Naomi Osaka, which caused her to become tearful in a press conference: “You’re not crazy about dealing with us . . . yet you have a lot of outside interests that are served by having a media platform. How do you balance the two?” Osaka’s agent called him a “bully” for his trouble, but, prima facie, it sounds like a reasonable question to me. Your thoughts?

Team of the Week

Shae Graham. Watch her go. The wheelchair rugby player is TFF’s pick to be the breakout star of the Paralympics, which starts in Tokyo next Tuesday. Go you good things!

Justin Langer. The Australian cricket coach has, I suspect, weeks at most still in the job. (See item.)

Melbourne Storm. Have now won their last 19 matches on the trot, equalling the record of the great Roosters side of 1975, captained by Artie Beetson.

Wallabies.The third and final Bledisloe Test is in limbo after the All Blacks refused to board the plane to Perth. Just remember, if they don’t turn up, they forfeit, and we WIN!

Toutai Kefu. Wishing him and his family a speedy recovery after a horrible home invasion, in which all four of the Kefus were stabbed and the former Wallaby No.8 grievously wounded – though all, mercifully, are now out of hospital.