From the Archives, 1949: Crew rescued from freighter marooned off Victoria

admin August 23, 2021 Victoria News Comments Off on From the Archives, 1949: Crew rescued from freighter marooned off Victoria 42 Views 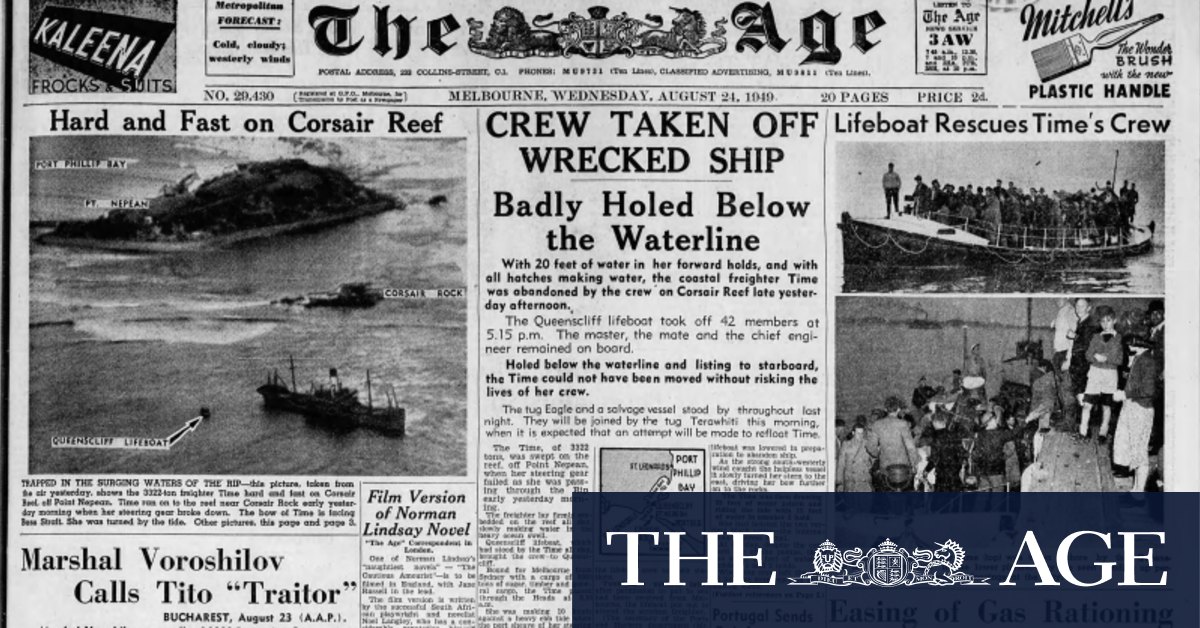 Queenscliff lifeboat, which had stood by the Time all day, brought the crew to Queenscliff.

Bound for Melbourne from Sydney with a cargo of 3000 tons of sugar, timber and general cargo, the Time passed through the Heads at 3.10 a.m.

She was making 10 knots against a heavy ebb tide when the port sheave of her steering gear suddenly broke and, with the port lead, was carried away.

When it was found she would not answer to the port helm an attempt was made to turn her starboard in a complete circle.

She was then a quarter of a mile from the reef, but, caught on the port bow by the ebb tide, she was slewed right round and driven on to the reef within minutes.

The impact was felt on deck as a sustained shudder. Those below received the greatest shock. Crew members asleep below where awakened.

At 3.50 a.m. she sent Point Lonsdale lighthouse the following message:

“We are ashore and require the assistance of tugs.”

Point Lonsdale replied: “Are you on the reef?” The reply came back, “Yes.”

A few minutes later, at 3.55 came the flash: “To all ships. Captain says he requires assistances.”

The next message was to Melbourne Radio (VIM) at 4.29: “Lifeboats not lowered yet, but bumping heavily.”

First news that the Time was flooding came at 5.43.

“No. 1 and No. 2 holds flooded. Bumping heavily. Queenscliff lifeboat standing by.”

At 4.45 the Queenscliff wreck alarm bell rang, summoning the lifeboat crew to their stations.

Twenty-five minutes later, after permission to put to sea had been received from Melbourne, the lifeboat put out to attend the stricken freighter.

The ship’s master (Captain W. H. McClenaghan) mustered the ship’s complement on deck. The men donned their life jackets and the forward port lifeboat was lowered in preparation to abandon ship.

As the strong south-westerly wind caught the helpless vessel it slowly turned her stern to the east, driving her bow further on to the rocks.

She had hoisted the two vertical black cones – the international distress signal.

At midday, despite the constant use of pumps, there was about 20 feet of water in numbers 1 and 2 holds.

When the crew left the ship all hatches were reported to be making water.

Previous Our freedoms and our rights come with a cost
Next ‘You are not a cow’: Americans warned over use of livestock anti-worm drug to treat COVID