From dog days to born again Bomber: the lesson of Jake Stringer

admin August 28, 2021 AFL Comments Off on From dog days to born again Bomber: the lesson of Jake Stringer 69 Views 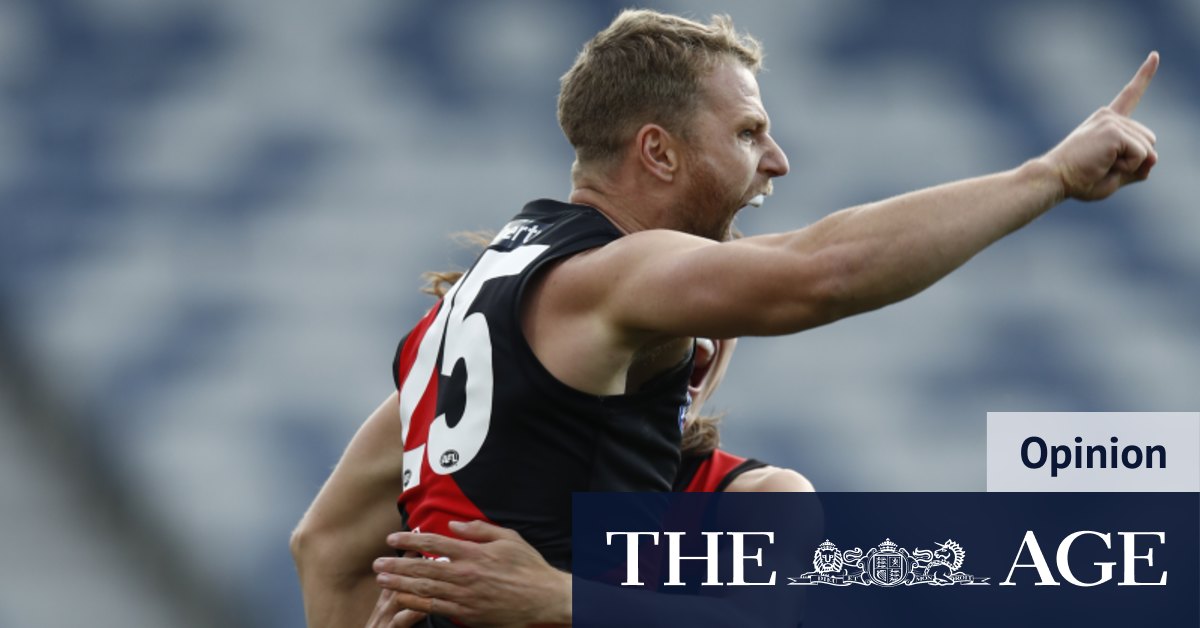 But it is unlikely to win a premiership (or three) without finding a way to accommodate its Mark Waughs – the less pristine or reliable talent, but who can be the difference when it matters.

It’s natural to think it’s the change of club that’s produced the better angels of Stringer’s nature, that he’s one of a litany of wayward, over-talented footballers – they’re often forwards – who needed that new environment, or to see the career cliff face, to transform themselves (Barry Hall a classic example at Sydney).

The problem with that storyline is that Stringer didn’t really morph into the ‘New Jake’ until this year. His first three seasons at Essendon weren’t terribly different to the end of his Dog days.
He remained an explosive, spasmodic performer, who could not produce his best for the duration of a game, much less for several games consecutively.

He has not finished in the top 10 of the best and fairest in three completed seasons at Tullamarine, a duck that he’ll break when the Bombers’ season concludes.

Stringer’s discovery of consistency coincides with an improved environment at Essendon, where standards have lifted in 2021 under a more demanding Ben Rutten, and where both Blake Caracella and Daniel Giansiracusa have invested time in Stringer.

Chris Judd was an instant star. Luke Hodge, from the same draft, needed four years before he arrived. Stringer, who has carried public baggage in his personal life, has taken until his ninth season for the proverbial penny to drop. It’s an impeccably timed change, given he was coming out of contract and thus earned a three-year deal with a trigger for a fourth

Stringer’s great leap forward has involved three steps by he and the Bombers:

1. He became seriously fit over summer. Hitherto, Stringer had made improvements in fitness, but the post-season of 2020 saw him hire a personal trainer and discover his inner Zach Merrett (concealed for the previous dozen years).

2. He’s more settled in his personal life, as a 27-year-old father, his partner Taylor McVeigh having given birth to Stringer’s third child, River.

3. By improving his fitness, Essendon could move him into the midfield more regularly, enabling him to become a two-in-one “package” – a forward who can win the ball at crucial stoppages.

One Essendon insider, asked whether Stringer’s come to Jesus season was due more to his maturation or the club’s improved environment, estimated the balance as 50-50.

One semi-jesting theory I heard is that the lockdowns in Melbourne have helped Stringer – and potentially other AFL players with a hedonistic streak – because he’s unable to get out on the town.

But it’s probably more pertinent that Stringer is 27, a father of three and has found belated maturity, his life change flowing into in his improved preparation, which, in turn, has been reflected in what he does on the ground.

It’s belated and overdue, but “The Package” has arrived at his desired destination. The tougher challenge will be to remain there.