admin August 30, 2021 Sport Comments Off on Late-night text from Roosters official and former ref at heart of NRL fury 69 Views 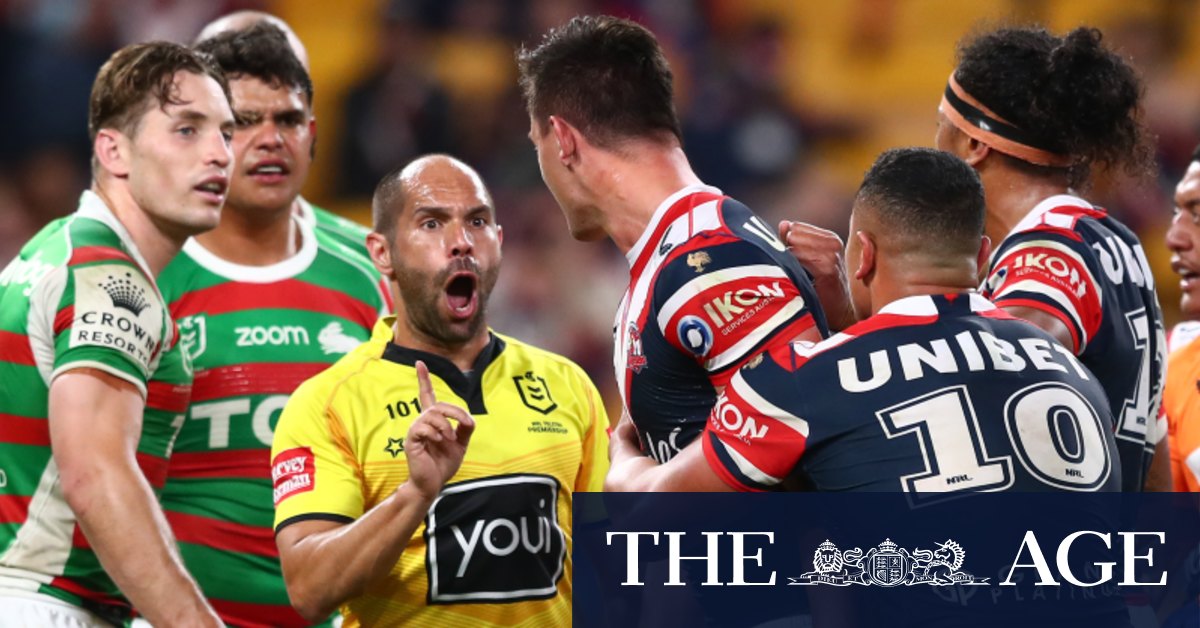 James could not be contacted for comment on Monday night.

The NRL took a dim view of the Roosters’ actions and the example it could set for parents and junior league coaches, alleging the abuse started well before Mitchell’s tackle on Manu brought the game to boiling point.

The NRL admitted on Saturday bunker official Henry Perenara should have advised referee Ashley Klein to send off Mitchell rather than use the sin-bin.

The Roosters were understood to have been furious with an ugly Liam Knight hip drop tackle which forced Siosiua Taukeiaho to the sideline with a knee injury. Knight was penalised at the time and will miss two matches after being charged by the match review committee. Taukeiaho has been cleared of serious injury.

Robinson, who coached from the sideline in the second half, labelled the officiating “an absolute farce and laughable” in his post-match press conference.

Robinson will invoke a $10,000 suspended fine for comments he made after the Roosters’ loss against the Eels in May if he’s found to have breached the NRL rules regarding public commentary on match officials.

‘In our view there was a lack of professionalism shown by the club and its officials across Friday night.’

In a season where they’ve bravely battled to stay in top four contention despite an unprecedented injury toll, frustration finally seemed to overcome the Roosters. Most notably, James Tedesco and Drew Hutchison had already been victims of serious foul play earlier this year which the NRL said should have been punished more sternly.

“Sport can be highly emotional and sometimes people will debate decisions made on the field and we expect all clubs to deal with on-field matters respectfully,” Abdo said.

“We can analyse and debate decisions, but such commentary should not be personalised and disrespectful. In our view there was a lack of professionalism shown by the club and its officials across Friday night. We’re an elite competition and we should set the standard for how to deal with adversity.

“We will not hesitate to remove the sideline access of any official who repeatedly makes abusive comments towards our match officials.”

The club has five days to respond to the breach notice.

Robinson hit back at claims he had abused Souths back rower Jaydn Su’A at half-time.“Definitely not true,” Robinson told the Herald on Monday night.

Su’A did not lodge a formal complaint, therefore the NRL did not officially investigate the allegation.

Souths CEO Blake Solly said: “If we have any concerns we will address them privately with the NRL and through the appropriate processes.”

The NRL said it hadn’t finished an investigation into whether sidelined prop Jared Warea-Hargreaves had an altercation with a Nine cameraman during the game.

NRL head of football Graham Annesley denied whistleblowers or bunker officials weren’t being held accountable for mistakes being made.

“In some cases their judgment is not what we would expect it to be and as administrators we have to respond to that,” he said.