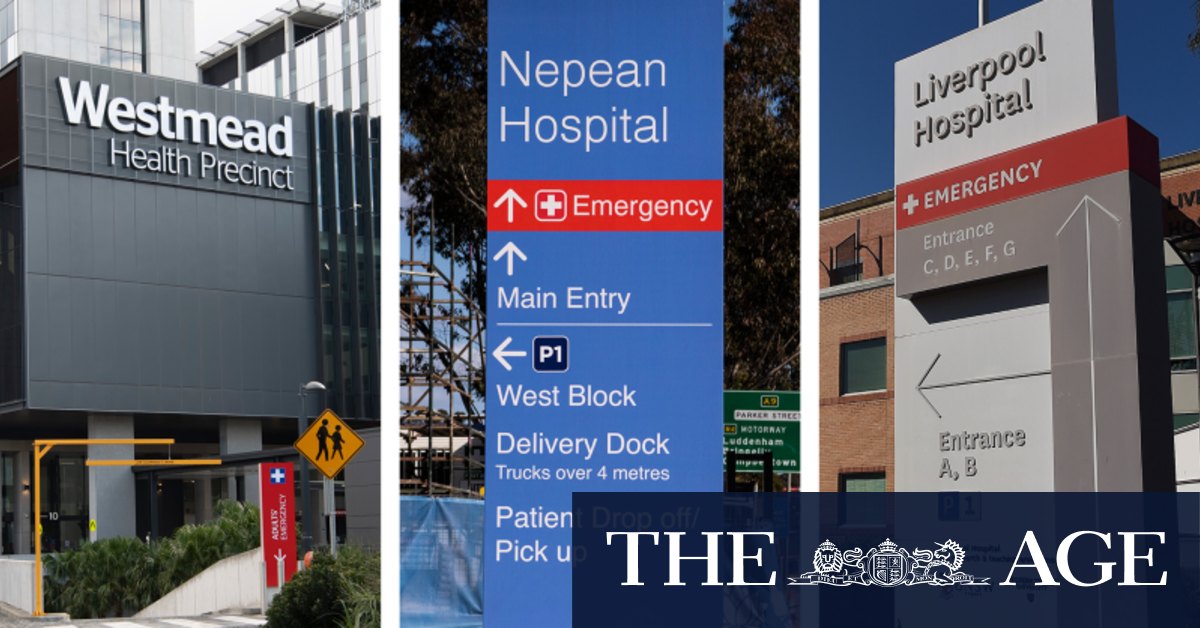 “That’s why we’re gearing up for that, we have been for nearly two years,” she said. “And I state again, our hospital system is under pressure. Will we need to do things differently? Of course we will.”

NSW is administering almost 900,000 jabs a week, putting it on track to reach 70 per cent vaccination rate by mid-October, when the ICU system is expected to face its biggest test. The Premier said health modelling suggested the pressure on the ICU network would decline, as the state came closer to its vaccination targets.

“Our ICU specialists, our emergency department specialists are some of the best in the world, and they’ve been planning and training to deal with what we’re likely to expect in the next couple of months,” she said.

Paramedics have been instructed to transport confirmed cases in western Sydney to Westmead while people with suspected COVID-19 were only to be taken to Auburn and Blacktown hospitals. Nurses treating patients at Westmead hospital say there is a “strong sense of hopelessness” as cases continue to rise.

A Westmead COVID ward nurse, who was not authorised to speak to the media, told the Herald it felt like they were “being told the health system is coping when it’s just not”.

“As the numbers go up you lose more and more hope,” she said, noting there had been multiple code blue incidents, episodes considered critical, on the ward in the past week.

An ICU nurse at the hospital, who is also not authorised to speak to the media, said about 30 per cent of staff in the unit had been pulled from private hospitals, pediatric intensive care and operating theatres yet it still continued to be short-staffed.

“These are patients that, because of their level of acuity, need to be nursed one to one but are being doubled two patients to one nurse,” she said, adding the situation was “quite dangerous”.

The nurse said the ICU had about 26 coronavirus patients on the weekend and about 24 standard ICU ventilators. She described the situation on the unit as “absolutely terrible”, with staffing the biggest problem.

“Nurses are burnt-out, no one wants to do overtime. There are no casuals to replace them,” she said.

“They should be certainly looking at deploying those patients elsewhere to lessen the load,” he said.

Health Minister Brad Hazzard said the hospital system was prepared for an even greater load of COVID patients than it was already supporting, with private hospitals on standby to offer further support.

Another four deaths were reported on Monday, among them an Indigenous man in his 50s in Dubbo who had underlying health conditions. He is the first person to succumb to the virus in western NSW, which recorded 60 new cases.

Another man in his 70s, a woman in her 60s and another male aged care resident also died in the latest reporting period.

“Ryde and Meadowbank and some inner west suburbs such as Marrickville [is] where we are seeing the introduction in factories and other workplaces.”

The Premier said the list of local government areas of concern subject to stricter restrictions in Sydney could be altered depending on ongoing numbers.

Randwick residents have given priority access to Pfizer jabs in the hotspot of Bayside amid concerns that 9000 doses could go to waste after people failed to turn up for appointments. Randwick, which borders Bayside, has also seen a growing number of cases from an illegal party on August 14.

Health advice governing the areas of the greatest concern will also consider immunisation coverage, where new cases are coming from and how are they being generated.

“We actually have conversations on a daily basis, and without raising too many expectations, there are a couple of local government areas that we’re considering taking out of those areas of concern,” Ms Berejiklian said.

Areas of concern that reported the lowest case numbers on Monday were Burwood, with one new case and Strathfield, which recorded five.