admin August 31, 2021 Victoria News Comments Off on Find out whether your area has any active COVID-19 cases and its vaccination rate against the virus 50 Views 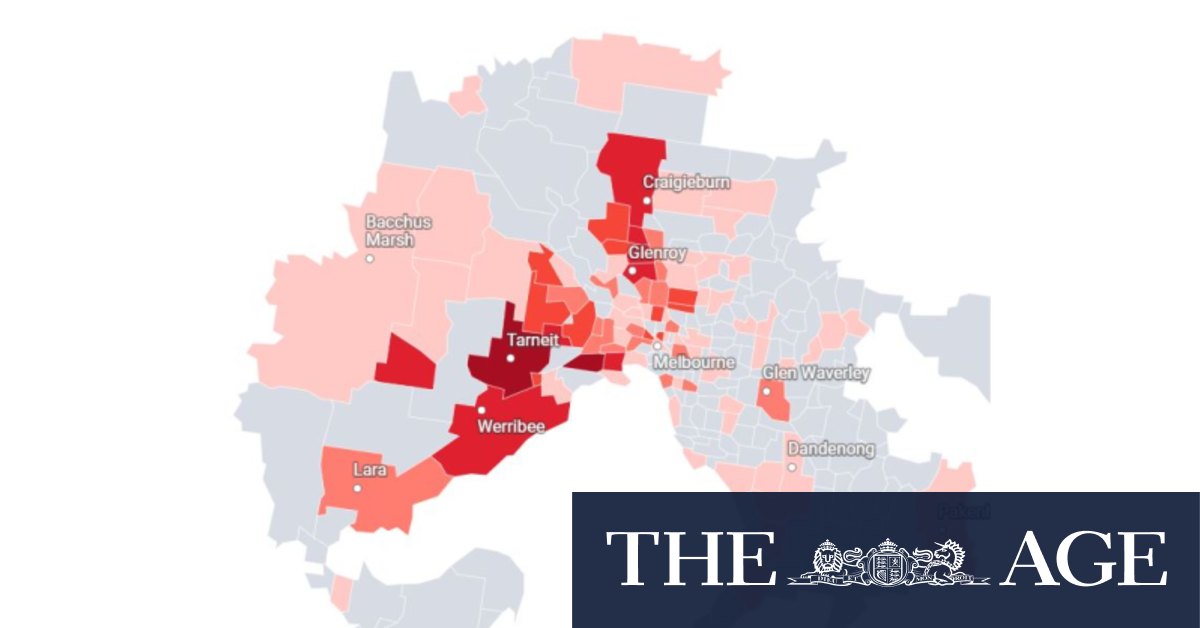 And postcode 3025 (Altona North) has the second-highest active case tally with 94, an increase of 26 active cases over the past seven days.

You can see how total active case numbers have tracked in your area over the past three weeks using the graphic below. If you type your postcode into the search box, the graph will show the number of known active cases there as of each day since August 17.

The figures, for Victoria’s 79 local government areas, provide the most detailed local view yet on the vaccine rollout.

Using the maps below, you can find the percentage of those aged 15 and above in your area that had received both doses of a COVID-19 vaccine as of August 27:

And this map zooms out to show all of Victoria, from which it is possible to see the vaccination rates in rural and regional municipalities:

You can use the controls in the bottom-right corner of the maps to zoom into your area. If you click or tap your local government area, an info box will appear that breaks down the percentage of the eligible population that have received one vaccine dose, as well as the percentage that is fully vaccinated against the virus.

Hume, in Melbourne’s north, recorded the lowest percentage of its population aged 15 and over fully vaccinated

As of August 27, just over 22.4 per cent of people in Hume aged 15 and above had received both vaccine shots, compared with 33.3 per cent of the eligible population statewide.

And 40.8 per cent of Hume’s eligible population had received one vaccine dose, compared with 54.3 per cent of the eligible population statewide. But this may in part be due to Hume having a population that skews younger than that of the state more generally, so the federal government’s vaccine rollout has meant this group until recently has had little access to jabs.

The Hume area currently has the fourth highest active case rate in Victoria, at 45 cases per 100,000 residents:

Of all municipalities statewide, Queenscliffe, on the Bellarine Peninsula, has the highest percentage of its 15+ population fully vaccinated, at 64 per cent. But it’s worth noting that this is also the state’s least populated local government area and that its population skews older than that of the rest of the state.

The data on vaccination rates by local government area will be released on a weekly basis by the federal health department, and we plan to start including this data in our vaccine tracker dashboard.