Breaking News
Home / National News / Guy set to become Lib leader, but O’Brien may ‘blow place up’ as he leaves

Guy set to become Lib leader, but O’Brien may ‘blow place up’ as he leaves

admin 2 weeks ago National News Comments Off on Guy set to become Lib leader, but O’Brien may ‘blow place up’ as he leaves 18 Views 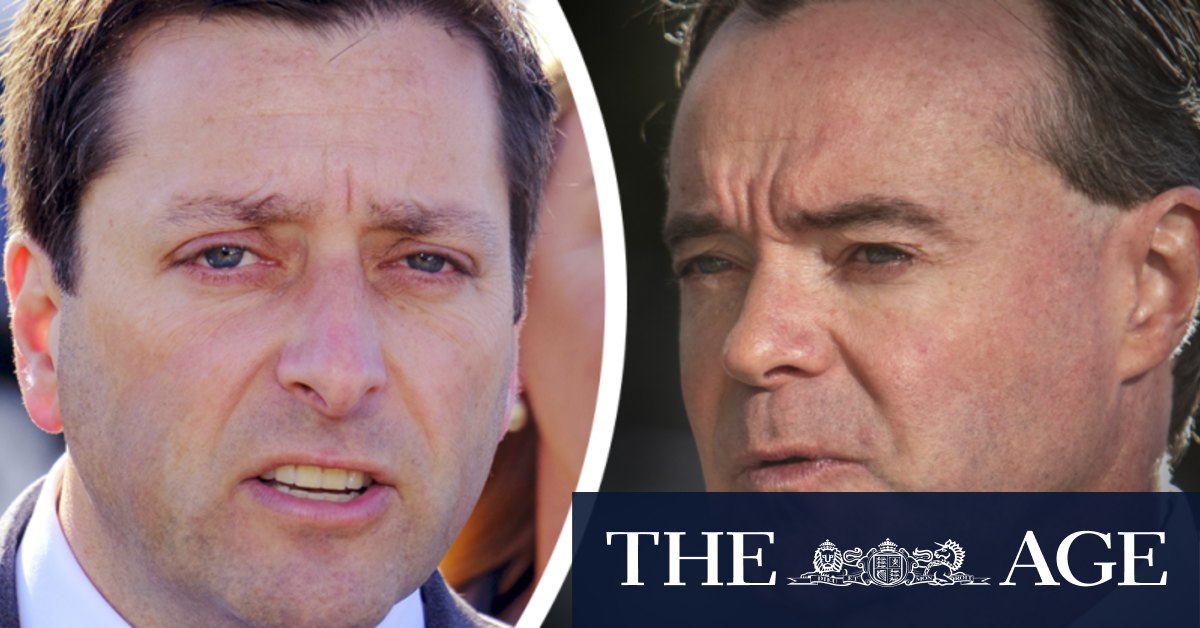 Mr O’Brien, who spent most of Monday with his team in his Spring Street office, told colleagues in phone calls that Mr Guy already had his chance at winning an election and was “soundly defeated”. He may not contest a leadership ballot if a spill motion is carried at the 7.45am meeting, and there remains a prospect he may quit before the meeting.

“He told colleagues he loves the state and that’s what gets him out of bed,” one MP said.

Mr Guy told colleagues the current leader had not landed a blow and polling showed the Coalition was in an unwinnable position. “He believes O’Brien’s office is lying about the polling,” one frontbencher said. “They are trying to make things look better than they are.”

The warring factions were briefing journalists with different interpretations of party research presented to state MPs last week, with Mr O’Brien’s camp claiming it showed the party in a “solid” electoral position. The Age confirmed the focus group research showed the party’s key messages – centred around regenerating Victoria and improving livability – were resonating with key demographics but did not assess Mr O’Brien’s personal standing.

On Monday morning Mr O’Brien was resisting an in-person party meeting and keen to conduct it on Zoom where a ballot could not occur, but senior party figures urged him to reconsider. Supporters of Mr Guy had earlier contacted Parliament to check if any room could hold 31 MPs while observing density limits but were told the only room big enough was Queen’s Hall, which is a public area where observers could have watched the meeting.

Mr Guy, Tim Smith, James Newbury and Bill Tilley resigned from their positions on Monday before a meeting of the shadow cabinet. The Age has spoken to several shadow ministers who had made the decision to vote against Mr O’Brien on Tuesday but attended the meeting.

The leadership tensions were left off the agenda of the 10.45am hook-up, with Mr O’Brien only briefly acknowledging the resignations before proceeding with ordinary business. “Michael was very dignified,” said one Liberal source. “It wasn’t a pitch for votes, but he said that whatever happens [on Tuesday], we need to unite and come together.”

Mr Guy is set to clear out the party’s frontbench, which includes long-serving members such as Gordon Rich-Phillips and David Morris, and add energetic younger MPs such as Mr Newbury and Richard Riordan.

Mr Guy’s run has been months in the making. He and his key supporters mobilised to ensure a March leadership challenge by Gembrook MP Brad Battin was unsuccessful. At the time, the Guy camp felt ambushed by the unexpected coup and believed if Mr Battin had ascended to the leadership the prospect of Mr Guy returning would have disappeared.

The move to block Mr Battin spawned months of personal vitriol between the Guy grouping and the Battin camp that includes Mr Riordan, Ryan Smith and Nick Wakeling. But over winter, the camps worked to settle their differences and slowly built a broad coalition of anti-O’Brien forces while the leader was going about his business attempting to hold the Andrews government to account over repeated lockdowns.

Liberal MPs expressed frustration and anger over what they said was Mr O’Brien’s refusal to work with the caucus and repair relationships.

Mr Guy led the party to a disastrous election defeat in 2018, losing 10 of its 37 seats and suffering a 5 per cent swing against the Coalition. The Liberal Party lost the blue-ribbon seat of Hawthorn and almost lost Brighton to a 19-year-old.

His supporters acknowledge his agenda leading up to next year’s election cannot mirror the 2018 campaign that had a heavy “tough on crime” focus.

The Age has confirmed three candidates – Mr Southwick, Louise Staley and Ryan Smith – are considering running for deputy leader. The latter two spent Monday canvassing for support, whereas Mr Southwick did not contact his colleagues.

Ms Staley was keen to keep her treasury portfolio and become deputy, though figures from the rebel groups insisted she would be unable to have both.

Ian Hanke, a long-time Liberal campaigner and former chief of staff to ex-Liberal leader Robert Doyle, said whoever emerged as leader after Tuesday’s ballot needed a “major reset” to outline their plan for the state.

“Whoever is successful faces the exact same challenges and the circumstances of COVID-19,” he said.

“They need to have a very serious plan, they need to write it down and stick to it. It needs to be a clear idea, and they need to be clear in its prosecution – not have shades of grey. The opposition needs a good circuit-break policy announcement, and [to] distinguish itself from the government.”

Mr Hanke advised the Coalition to bring the election fight back to its own turf – a political tactic used successfully by Premier Daniel Andrews, who consistently dismisses the opposition as “irrelevant” and refuses to engage with it.

Labor campaigner and political researcher Kos Samaras said the return of Mr Guy to the leadership would probably not improve the party’s fortunes.

“Guy will probably provide the Liberals with an edge in suburban areas but take away the Liberal Party’s ability to speak to growing constituencies in middle-ring suburbs where younger tertiary-educated voters are moving in,” he said.

Mr Samaras said he expected Mr Guy would attempt to rebrand himself following his 2018 election loss and said the pandemic would give him a chance to refocus.

“If you are at the epicentre of a campaign, as Guy was, and you have spent millions on your brand, it can be hard to change perceptions and then if he changes too much, it will look like a stunt.”

Previous Fresh blow for wounded Wallabies as Vunivalu suffers new injury
Next Little, but some, reason to combat scepticism at safety summit