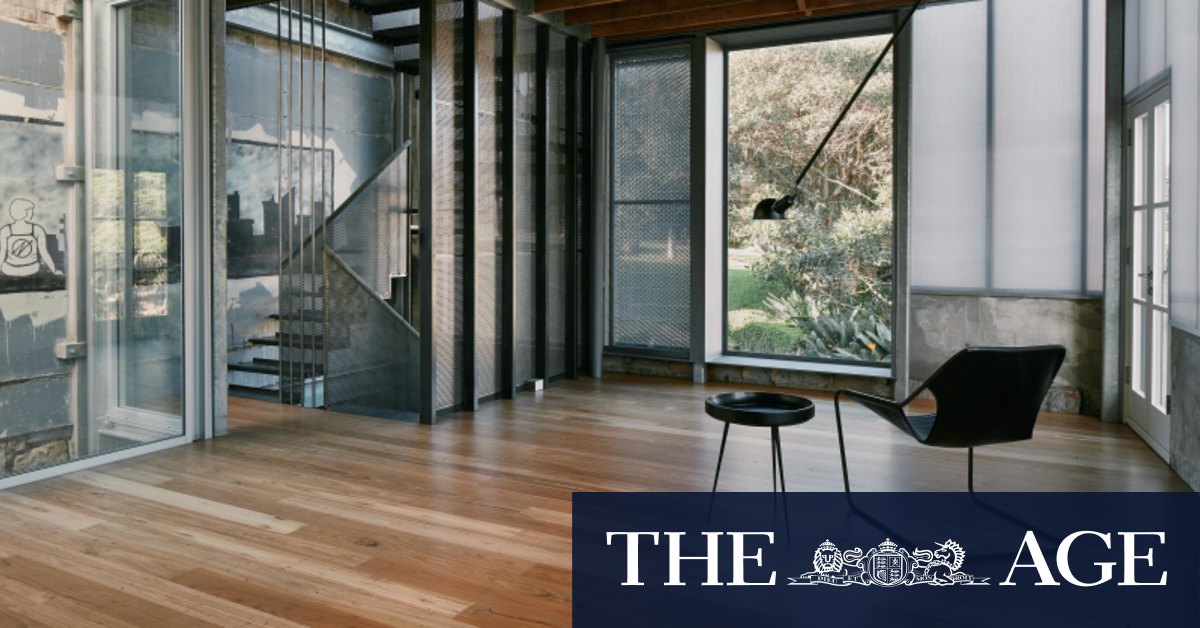 Welsh + Major retained the sandstone base and masonry first floor, and added a third level, recessed behind the new translucent polycarbonate and steel mesh façade, treated as a veil or skin to the original structure.

Orientated to the south, there’s an even quality of natural light during the day, and at night the concealed lighting creates a lantern effect.

Each townhouse has a slightly different configuration and material palette.

Each one also is different in size, with the family’s home being approximately 200 square metres in area, while the neighbouring unit, also over three levels, is 170 square metres.

For the main residence, materials such as marble appears in the kitchen benches and splashbacks, while the smaller of the two features timber joinery.

However, both express the building’s original structure, with elements such as the perforated steel balustrades for the staircases having an industrial aesthetic.

Welsh + Major worked with heritage architect Stephen Davies from Urbis to ensure as much of the original ‘grain’ was preserved.

Given the owner’s brief included as much natural light as possible, Welsh + Major located two bedrooms and a bathroom at ground level, together with a bathroom and enough space for a single car.

“Our clients wanted a fairly flexible arrangement of spaces. The car space can be used as a home gym or simply an undercover area for children in more inclement weather,” says Welsh.

On the middle level, connected by the staircase, is the open-plan kitchen, dining and living area, together with a guest bathroom.

On the second level is the main bedroom suite, together with a rooftop garden directly above (a bonus given the restricted plot of land).

This rooftop garden also benefits from views of the Blue Mountains to the west and glimpses of Botany Bay to the south.

The charm of this renovation/virtually new build is in the history that can be seen at every turn.

One can still imagine how goods were once hoisted onto the first floor, although now there are double doors and a balustrade.

Likewise, there’s what Welsh describes as ‘ghost’ signage and layers of paint in different colours expressed on the walls of an adjoining terrace.

The graffiti from squatters and from those partying have also been recorded for prosperity, much of which can be traced back to the 1970s.

Rather than just simply being raw and industrial, the hat factory is now a comfortable home for a family wanting to downsize and be closer to the city.