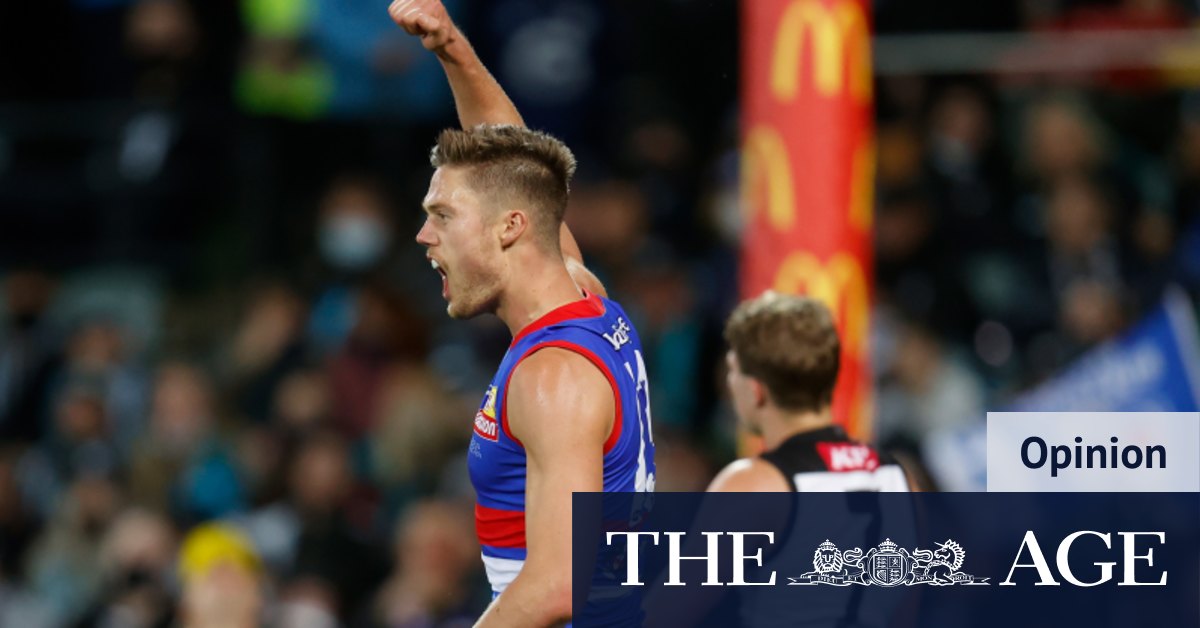 The pre-grand final bye has worked in Martin’s, and thus the Dogs’, favour. After a long lay-off, having a week off now after a first game can only help him. Doubtless it also helps Steven May and his twanging hamstring.

Beveridge played Marcus Bontempelli, which might have been a risk given the way Bont moved at the end of the semi-final but the way he moved even in the warm-ups on Saturday night, without strapping on his leg, the sillier move would have been not to play him. A week off now will not upset Bont.

Beveridge’s clever use of Schache and English provides a window on how the grand final will play out and is the Dogs’ best avenue to overcoming the side they sat one rung beneath on the ladder for much of the year.

May and Jake Lever are an exceptional tandem defensive unit, the best in the AFL this year, and so it can be expected the Dogs will seek to nullify them similarly to how they handled Aliir and Tom Jonas. Firstly, their primary objective is as protectors of Naughton’s space. Secondly, if Naughton doesn’t mark the ball they have to make sure neither of Lever or May does.

A difference on grand final day will be that where Port likes to keep Aliir away from the opposition’s best forward, Simon Goodwin wants to put his best defender May on the opposition’s best big forward. You’d expect May to get Naughton. With Harrison Petty a probable opponent for English, Schache could end up trying to occupy Lever.

Mitch Hannan, the former Demon, was surprisingly good in a sort of Josh Bruce role. It’s the role Bayley Fritsch plays so well at Melbourne as a third tall, elusive marking target. The inclusion of Cody Weightman will give them more bite at ground level.

Cats must face some tough questions

The searching post-mortem questions at Geelong will query: the state of their list; how much the (non-COVID) virus that ripped through a bunch of players in the last week played a part in their prelim embarrassment; and whether they are so far down the road of topping up after what they gave up to get Jeremy Cameron that they can’t go back now. But there is one question that stands separate to all of them.

Teams that have played for territory have had more premiership success in the modern era than those controlling the ball. Geelong have liked to control the ball, believing if they have the ball you do not. Ownership of the ball means owning the tempo of the game and the manner and method of attack.

There is one certainty about the grand final in a fortnight’s time; The president of the new premiership-winning club will be a woman.

For the first time ever, the presidents of the two clubs in the grand final are both female. And this comes after Peggy O’Neal oversaw the Tigers’ last three flags in four years.

Kylie Watson-Wheeler is now president of the Bulldogs. Kate Roffey was installed as Melbourne president this year after, it must be remembered, a remarkable boardroom change.

Given the political dramas that had engulfed Collingwood, Melbourne barely registered a blip for their changes, but they were significant if not seismic. The Demons were undefeated a month into their season when the president Glenn Bartlett was voted out of the presidency by his board.

As a senior Melbourne figure said at the time, it was the type of issue that had the capacity to hijack a season, but it didn’t. On the contrary, the swift action proved to have the opposite effect of cutting off any disquiet. Roffey was installed as president and a calm descended at the Demons.

Final word to Brad Johnson, who enthused after Saturday night’s win that it was the Bulldogs’ most meaningful victory outside a premiership.