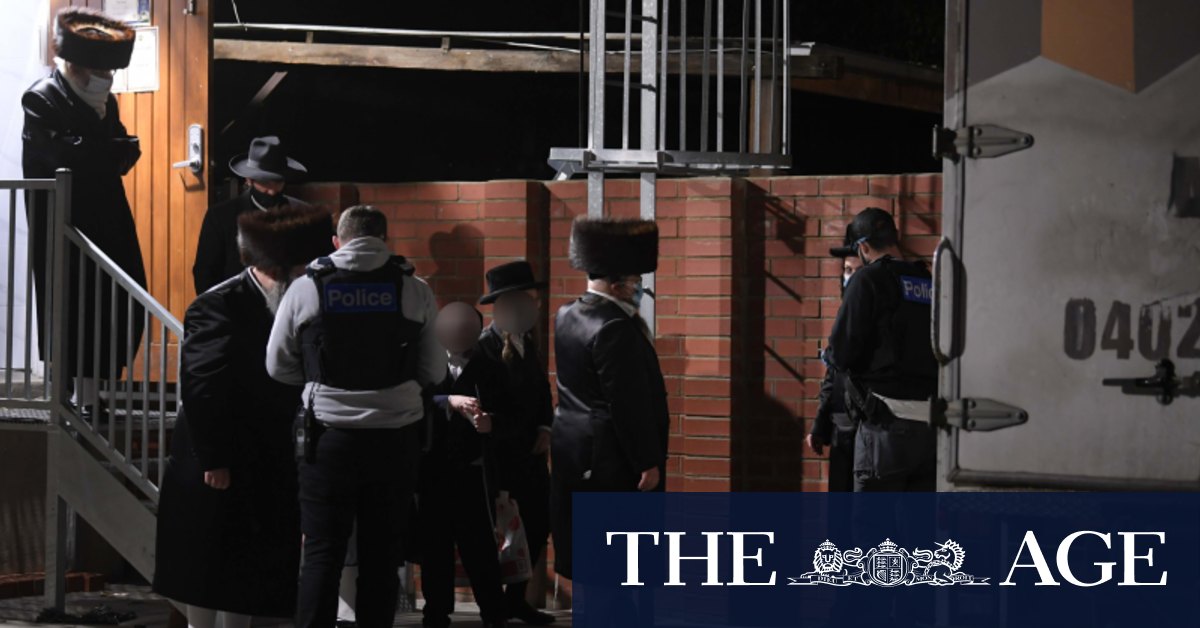 Anti-Defamation Commission chairman Dvir Abramovich called for the publication of the material and for the perpetrators to be investigated by police.

“Racism is ugly, hateful and ignorant and the public need to see these people for who they are,” Dr Abramovich said. “There is an epidemic of anti-Semitism in Melbourne and it’s a problem we can’t ignore. Times of turmoil have always offered fertile ground for racism, and I am very alarmed by the scale and depth of the wave of hatred.”

Warning: the audio below contains strong and offensive language:

He also expressed concern at the emergence of anti-vax group White Rose, which has recently posted stickers in Bentleigh and Caulfield that include swastika symbols and the slogan: “No Jab, No Job.”

The organisation, which started in Britain and has recently emerged in Melbourne, is named after an anti-fascist group led by Hans and Sophie Scholl, who were executed by the Gestapo in 1943 for their resistance campaign against the Nazis.

The new White Rose group opposes mandatory vaccinations and lockdowns and claims the measures are similar to the rise of the authoritarian state in Germany under Adolf Hitler. Dr Abramovich said any comparison was offensive, and the stickers had deliberately been placed in “the heart of the Jewish community” to cause fear.

Warning: the audio below contains strong and offensive language:

“I should not have to say this, but not being allowed into a cinema or a restaurant to stop the spread of a deadly disease has no equivalence to the horrors of being segregated in ghettos, or children being shot, or mothers and fathers being gassed in Auschwitz,” Dr Abramovich said.

A recent investigation by The Age, The Sydney Morning Herald and 60 Minutes revealed that white supremacist groups were exploiting misinformation about COVID-19 to recruit new members and seed more extremist views into mainstream politics.

The infiltration of the National Socialist Network showed leaders of the far-right group railing against lockdowns and vaccination, with some members caught attending rallies and screaming anti-Semitic abuse.

The Council of Orthodox Synagogues of Victoria has also come in for anti-Semitic attacks in recent weeks, according to president Mark Cohen, who described the abuse as “unfathomable”.

“It’s hard for us to understand where this vile sense of self-righteousness comes from. We’re just aghast. We’re doing the same things that everybody else is doing, there is nothing different about Jews other than having a religion that we are born into,” Mr Cohen said.

Jewish historian and academic Mark Baker condemned the surge in anti-Semitism, but said online vilification was not confined to the Jewish community.

“Anti-Semitism on social media also needs to be viewed in a wider context of vile abuse against other groups – women, Muslims and immigrant communities,” Dr Baker said.

He also accused some members of the Jewish community of unfairly claiming they had been singled out by the Andrews government last month, when COVID response commander Jeroen Weimar apologised after mentioning that some Orthodox Jews had tested positive to coronavirus.

“I think [Premier Daniel] Andrews, [COVID response commander Jeroen] Weimar and [Health Minister Martin] Foley have acted in an exemplary way towards all ethnic communities by differentiating between the wrongful actions of the few and the vast majority who abide by the rules,” Dr Baker said.

A Victoria Police spokeswoman said there was no excuse for behaviour that promoted fear or hate.

“We treat any report of anti-Semitism seriously, whether it happens on the street or online. We encourage anyone subjected to these crimes or who notices suspicious behaviour to contact police,” she said.