admin September 16, 2021 Sport Comments Off on How fatherhood and footy have been the making of Manly centre Harper 51 Views 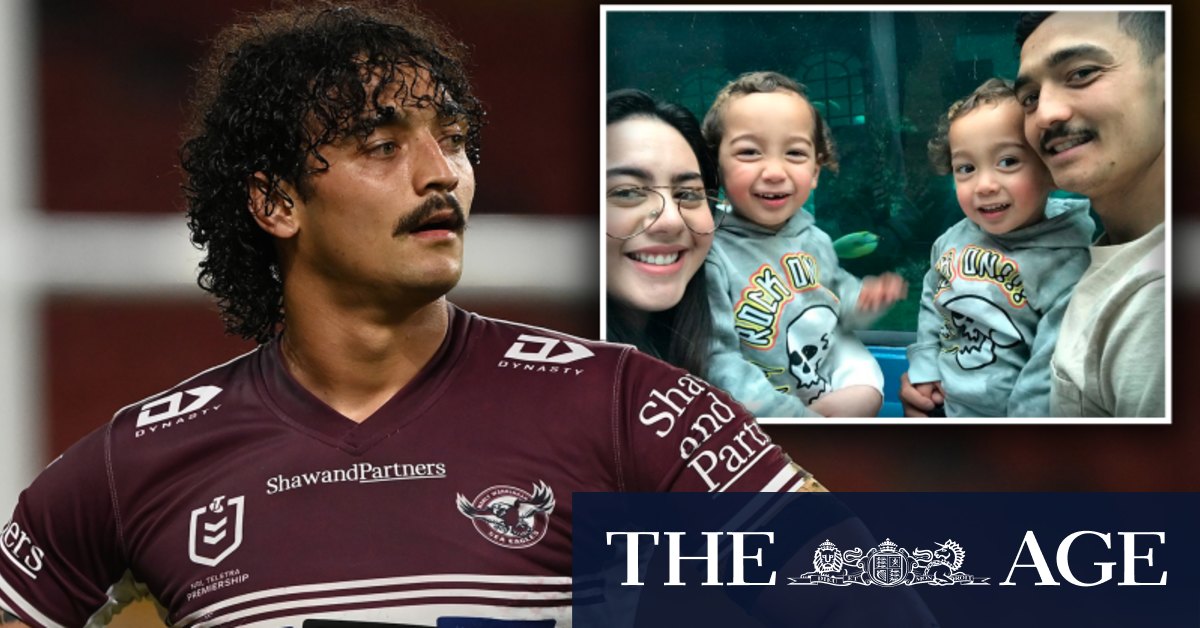 “At one point, I thought it was an obsession to be worried about.”

But life at Belmore wasn’t initially all it was cracked up to be. For the first six months, he lived away from his partner, Bayley, and kids, with only the occasional trip back home to New Zealand to look forward to. The Junior Kiwis centre was working jobs laying cable and as a gardener to make ends meet, which he squeezed in around his footballing commitments.

And even when things were going well on the field – he was part of Canterbury’s premiership-winning 2018 NSW Cup side and was then named its captain the following season – he was unable to break into the first-grade squad.

Which is why, in those first six months in Australia before his father crossed the Tasman with Morgan’s partner and children in tow, he thought about chucking it all in.

“It was a bit touch and go there,” Paul said.

On one of the occasions Harper came back to New Zealand to visit his family, he resolved not to return to the Bulldogs.

“I remember one weekend he was due to fly back to the Bulldogs where he didn’t want to go,” Harper’s mother Sonia said. “He refused to go to the airport. That’s when we sat down as a family and worked out ‘You’re pretty good at league, why not give it a go?’”

“I’m really proud of the father he is and the partner he is.”

The Harper clan then hatched a plan; if it appeared Morgan could make a career out of football, the entire family would shift to Australia to support him. However, when that eventually happened, the Hamilton Boys’ High School product still struggled to get his break. Harper was signed to Canterbury by coach Des Hasler and recruiter Noel Cleal, but the pair were moved on from the club in 2017.

Replacement coach Dean Pay couldn’t find a spot for Harper in his first-grade side, so when Cleal and Hasler found themselves back at Manly, they eventually convinced Harper to join them.

The Ngaruawahia Panthers junior hasn’t looked back, becoming a mainstay of the Sea Eagles backline. Even after producing the worst performance of his career, in last weekend’s loss to Melbourne, Harper has retained his spot at the expense of explosive three-quarter Moses Suli.

Now a father of three – youngest child Inara May is one year old – his footy and family life has all come together. Yet for all of his success on the field, his parents are most proud of the role model he has become to his young family.

“It has been quite a journey,” Sonia said. “Being a young parent and trying to survive in Sydney, it’s quite difficult. I was proud of the fact he was a young father who wanted to commit to his kids.

“To me, that’s an honourable thing, not many young dads would do that. It sounds corny but they have such a positive home life, they have been together since they were 15, they were high-school sweethearts.

“What’s made us proud is he wanted to be a father. When people have babies young, the success rate isn’t great of them staying together or being involved.

“We are really proud that he is a great father, an amazing father. His little girl adores him.

“He needs Bayley and his kids to be who he is. I’m really proud of the father he is and the partner he is to Bayley.

“It’s so easy to give up, but harder to achieve. If you put your mind to it and persevere, you can do it.”

Paul added: “At one point he wanted to chuck it in and come back.

“But once Bailey and the boys got here, it changed everything for them.

“People may think it’s a burden having the kids and whatnot, but it was actually the opposite.

“That’s what gave him the drive and purpose. I honestly believe Bailey and the boys is one of the reasons he made it.”