admin September 21, 2021 Sport Comments Off on From the Archives, 1986: Matthews the hero in second-ever tied Test match 29 Views 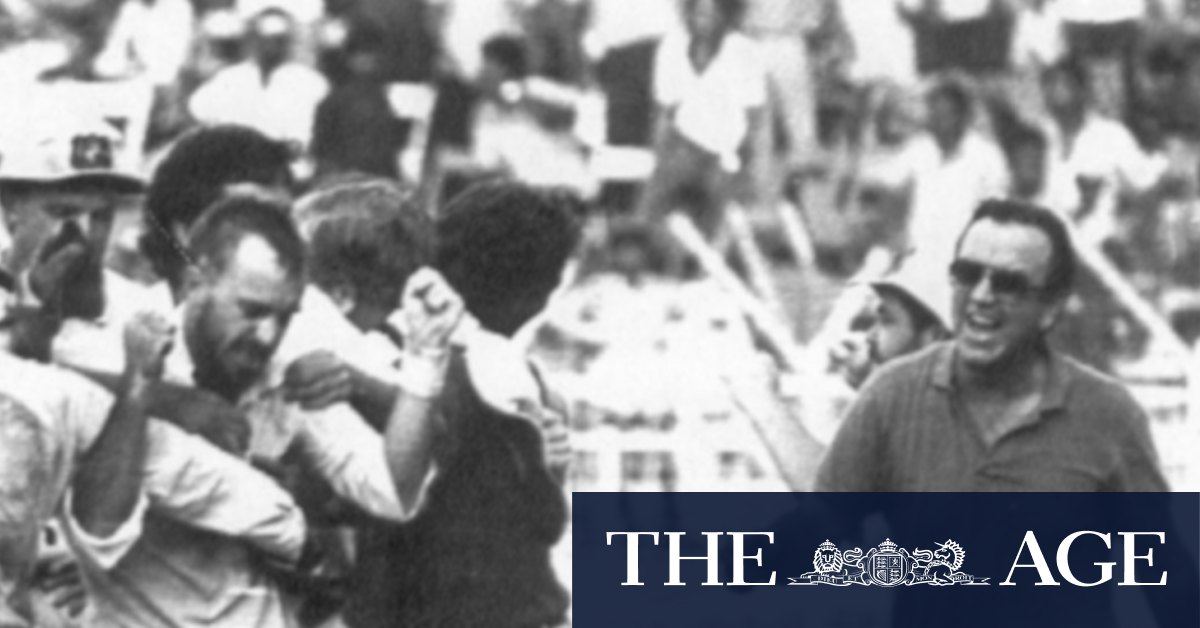 With vice-captain Ravi Shastri and the gutsy little fighter Chetan Sharma handling the mix of Australian spin and pace with ease the home side appeared to be cruising to victory.

But the Australians even though they were dog-tired after chasing leather all day in 40-degree heat and frustrated by constant clashes with the umpires and Indian batsmen refused to concede that the match was all over.

Their relentlessness brought a justifiable reward. The last four Indian wickets fell for 16 runs off 22 balls and the game suddenly became a precious moment in the history of Test cricket

The final scoreboard, which from today will now be memorised by every cricket buff, showed that India, which made 397 in the first innings, was bowled out for 347. Australia, which won the toss and batted, declared both innings closed, the first at 7/574, and the second 5/170.

In the final desperate stages, it was the two spinners, Ray Bright and Matthews who cracked the Indian tail.

Bright who had battled illness throughout the match, showed great courage and composure in those final overs as the Indians wound up for their final lunge at victory.

Matthews, who had also been his usual inspirational self in the desperate final moments, snatched his place in history with that final ball, which got past the defensive bat of Maninder and rapped him on the pads. But Bright also had his share of the glory, taking three of the last four wickets.

Bright finished with 5/94 off 25 overs and Matthews, with his second five-wicket haul from the game, had 5/146 from 39.5 overs. After Sunil Gavaskar, 90, and Mohinder Amarnath, 51, had seemingly cleared the way for the Indian victory after a second-wicket partnership of 103, the Indian batsmen never seemed to panic about the situation, until the final overs.

The Australian glee at Kapil Dev’s second ball duck caught at short fine leg while trying to hook, was short-lived as his deputy Shastri took over the bridge.

With controlled aggression he swung the match into India’s court lashing out once or twice an over and then constantly farming the strike.

But all the best laid plans fell apart under the weight of the Australian commitment.

In the same over wicketkeeper Kiran More was given out lbw for a duck. With three overs to play India was 8/334.

Yadav had looked particularly dangerous, having smashed Matthews for six high over long-on in the previous over.

But that wicket off the last ball of the second last over set the stage for the most dramatic moment in Test cricket In 26 years.

With India needing four runs off the last over, Maninder Singh, who is close to the worst batsman in Test cricket ambled out in his yellow patka to take up the crease at the bowler’s end.

He looked as if he was shivering, and well he might Shastri got two runs with an on-drive down to Steve Waugh who fumbled on the mid-wicket boundary.

Then on the third ball, Shastri made the fatal mistake of taking a single and exposing Maninder to the strike.

The Indian left-arm spinner patted the first ball back but with the next pitched right in line with the stumps, he shuffled across and back, misread the line and was plumb lbw.

While this game will be always linked with the Brisbane tie, it was, in many ways, so different from that game.

Unlike the 1960 tie, the relations between the two teams were as bitter as any seen on the Test cricket field.

Angry players and umpires gathered In milling packs several times as disputes broke out when the pressure became intense.

Matthews and Indian batsman Chandrakant Pandit clashed repeatedly and at the final drinks break, they were seen yelling insults to each other.

Pandit who made a solid 39, had to be dragged away by his 12th man.

Then the anger erupted again when umpire Dotiwala, who clashed constantly with the Australians throughout the match complained to Border that the Australians were taking too long to bowl their overs.

Previous Third Russian charged over Novichok poisoning of defector and daughter
Next “A crisis like no other”: Artists lead calls for vaccination