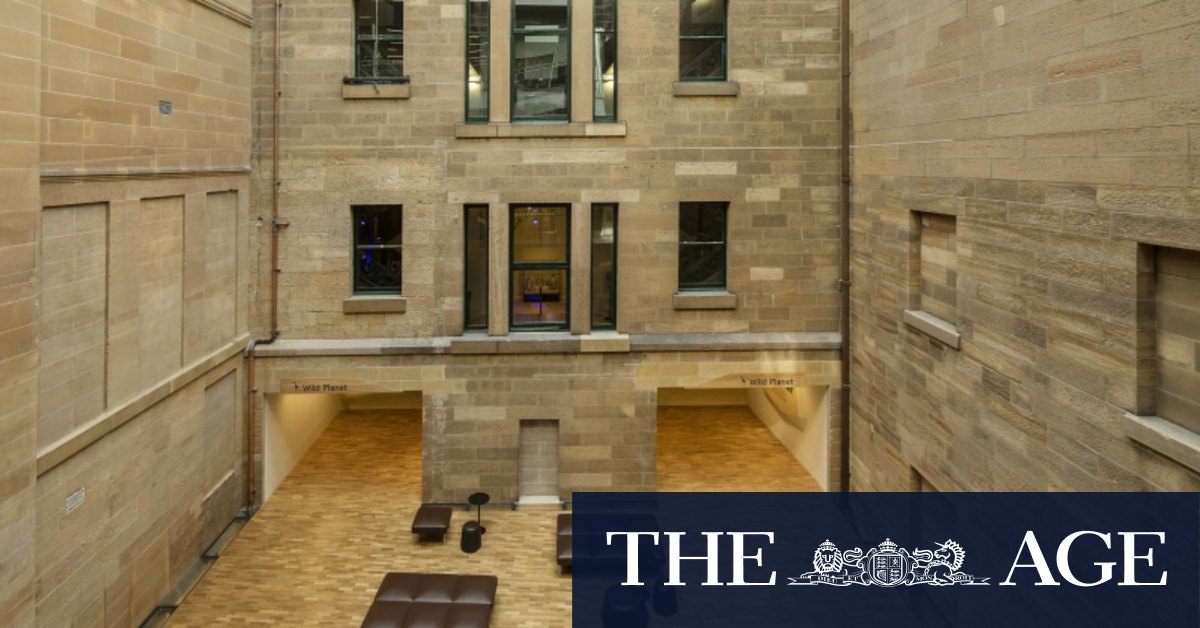 Rather than try and unravel work from the past, the architects made a number of strategic moves.

One of these was opening up the northern elevation, orientated to a verdant cone-shaped park that leads one’s eye to St Mary’s Cathedral and the harbour beyond.

Another move was to remove the mezzanine level from the ’80s steel insertion, allowing for more fluid spaces (and sight lines).

New timber parquetry floors, the pattern of which is evocative of a cobbled laneway, also replaces the different floor levels that formerly existed.

“There was no clear path through the spaces,” says architect Rachel Neeson, who was conscious of the need to improve the vertical circulation through the museum.

Rather than take a series of awkward turns, there’s now a crisp, white-painted steel staircase that allows one to clearly read the building’s past and more recent past, such as the sandstone walls from the 1960s.

“We were also mindful of providing flexible spaces, ones that could both attract and accommodate major exhibitions from overseas, as much as areas for events and functions,” says Neeson.

In the ‘bowels’ of the museum, once simply used for storage, is now a 1,000-square-metre exhibition space, referred to as the black box.

Capable of displaying dinosaur remains, the black walls and exposed ceiling allow the exhibition to be the focus.

Below are the new cloaking arrangements, lockers and bathrooms, the latter requiring a significant overhaul.

“We’ve endeavoured to include as much of the building’s original fabric as possible,” says Agius, pointing out the chunky sandstone columns that are now juxtaposed with the new terrazzo bench to the cloak room and the terrazzo floors.

The architects were as mindful of creating amenities for schoolchildren (a separate conference room on a lower level acts as a starting point before students begin to explore the museum).

While there’s an escalator that leads to the newly created exhibition space, the architects also provided gentle ramps through the building that allow for prams and small children: a significant number of which use the museum.

One of the most delightful spaces in the Australian Museum is the main hall, with its soaring sandstone walls.

People can simply pause and reflect on this space or take a seat in the reworked central pod and wait for their friends to arrive to explore the museum together.

And while the result appears seamless, as mentioned by Neeson, “when you’re working with old buildings such as this one, you never really know what to fully expect until the construction work begins.”

Previous Mayhem and sadness in a week Melbourne finally snapped
Next Now we’ve worked from home, do we want to keep doing it?