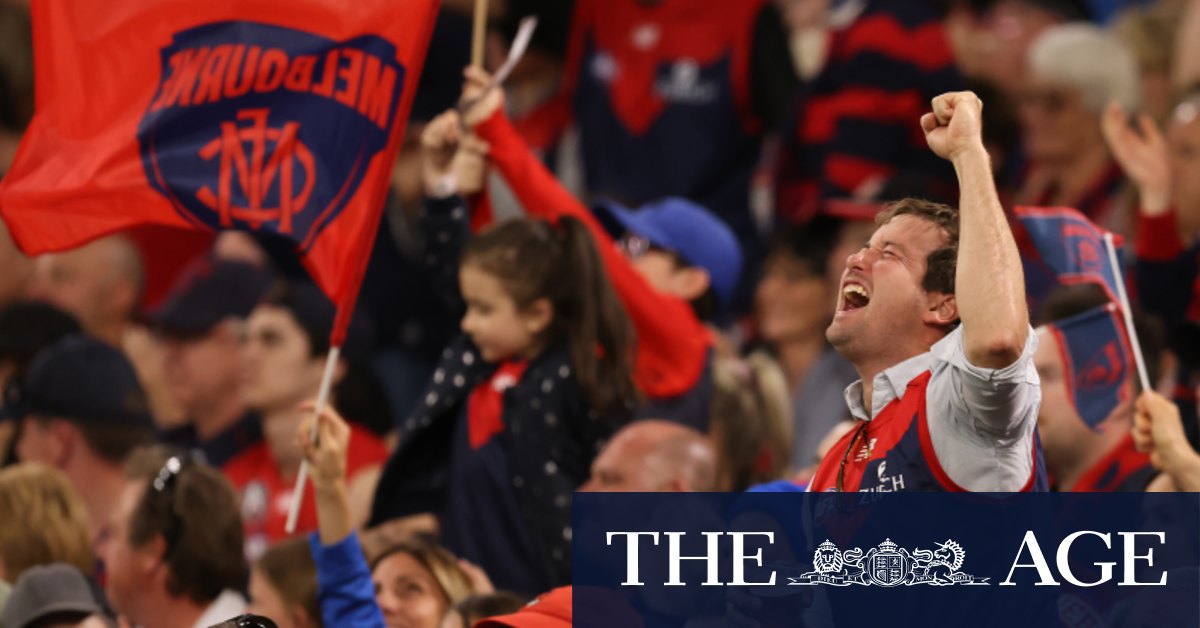 Andrew Monro, 50, was a whirlwind of emotions as his team finally achieved something he had waited for his whole life.

“I’m in disarray to be honest,” the Demon tragic said.

“We were going to every game and getting done by 40, 50, 60 points. To finally watch the club turn it around, they’re showing their supporters this stuff.

“The whole [Norm Smith] curse thing, everything Melbourne touched was tarnished and never worked out. Things have turned, big time.”

It was just about the perfect start for a nervous supporter group. The Demons came out hot in the first quarter, piling on four goals to one in a dominant first quarter.

“I am daring to dream, they’ve got a buffer but it can be lost really quickly too,” said Suzzane at quarter time, rapt at her team’s good start.

In the second term, the Bulldogs roared back with an even better six-goal quarter of their own. Marcus Bontempelli led the way with two goals, as the Demons struggled for answers.

Half time arrived just in time for the Dees, their fanbase trusting that this team is good enough to come back.

“I’m sure they’ll get a stern talking to at half time and come out better,” said Andrew.

Momentum stayed with the Dogs in the third quarter for another two goals, before Melbourne stormed back with six of their own. Christian Petracca’s goal from the boundary a highlight.

At her house in Briar Hill, Suzzane was thumping the coffee table. Her husband, John, another Dees fan, had left the house, unable to take the tension. A margin of 24 points looked comfortable but the Demons have been burnt before.

They needn’t have worried. The final quarter was a procession, as the Demons piled on nine goals to put the margin well beyond doubt long before the final siren.

It’s a small mercy for a fanbase that has waited so long for a flag.

“Even though it’s in a different state, we’re going to party like it’s at the MCG,” said Angus.